On Wednesday, at 10:00 pm GMT, the Reserve Bank of New Zealand will release the official interest rate, which is the interest rate that New Zealand banks use to advance money deposited with the central bank.

Binary options traders view the official interest rate as the most important factor in valuing the New Zealand dollar against other currencies. In fact,  Most of the other fundamental indicators are taken into account only for the possibility of predicting the interest rate in the future.

Last month, the Reserve Bank of New Zealand set the official interest rate at 2.25% and expectations for this month were that the rate would drop to 2.00% in order to support New Zealand's slowing economy.

On Thursday, at 1:30 p.m. GMT, the US Department of Labor released the Unemployment Claims Number, which measures changes in the number of people who have claimed unemployment insurance over the past week. Binary options traders look at jobless claims data to be one of the most important fundamental indicators of the US labor market. This is primarily because unemployment and consumer spending are directly related to the growing number of jobless claims which indicate a decline in consumer spending in the economy, which constitutes the bulk of economic activity in the United States.

Last week, the US jobless claims number came in at 269,000 and expectations for this week are currently set at a slightly higher number at 272,000. 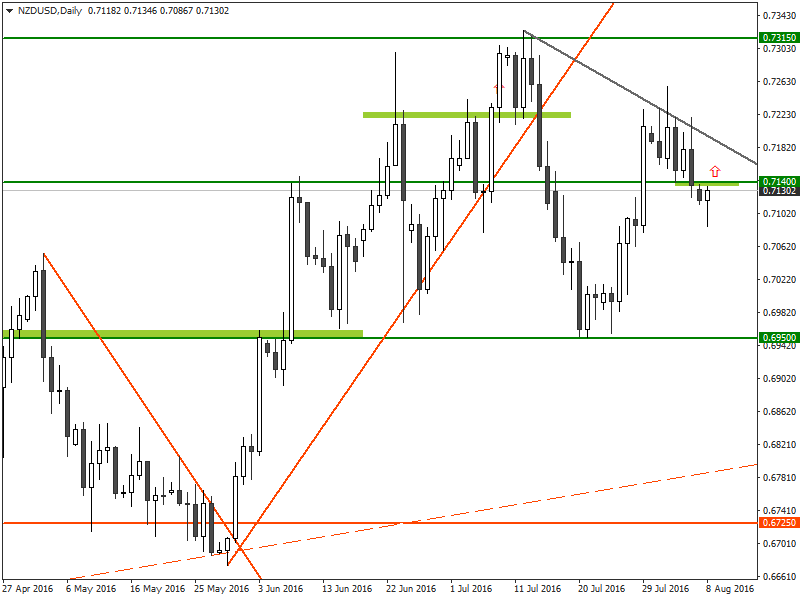 Since the formation of the pin bar candlestick strategy on May 30, 2016, the price of the currency pair has remained  The NZD/USD is in a strong uptrend, which pushed the price about 630 pips towards the resistance level around 0.7315. However, shortly after reaching the resistance level at 0.7315, the NZD/USD currency pair lost  Momentum and the pair started a retracement movement towards the support level around 0.6950. Over the past two weeks, the NZD/USD has mostly remained range-limited.  Between levels of 0.6950 and 0.7315, but it managed to form a descending trend line as well.

Earlier today, the NZD/USD fell by 45 pips after forming a bearish outer band (BEOB) last Friday. However, at the end of the London session, the pair rose again, forming a possible bullish bar.

As the Reserve Bank of New Zealand is expected to cut its overnight interest rate to 2.00%, the fundamental outlook for the NZD/US dollar currency pair is likely to remain bearish this week. However, if today's price action forms an ascending pin bar, binary options traders should consider taking a bullish position as the price may move to retest the downtrend line before going lower again.

Under these circumstances, it would be advisable for binary options traders to consider placing a buy order on the NZD/USD currency pair with binary options brokers as soon as the price rose and closed above 0.7140, which is the next major resistance level.

[featured feattitle='Recommended Binary Options Broker: IQ Option' site='IQ Option' ]IQ Option It is the best broker for binary options this month. You can see the evaluation of IQ Option[/featured] [featured feattitle='eToro' site='eToro'] eToro Established in 2006 by Professional Traders, it is the world's leading social trading network today with over 4,500,000 registered traders. [/featured]

Contents hide
1 New Zealand - Official Interest Rate
2 United States - Unemployment Complaints
3 Trading recommendations for the NZD/USD currency pair
Forex Brokers Offers
Your capital is at risk
The complete list of forex brokers
Trading with a regulated broker
Your capital is at risk
© All rights reserved 2022-2'13. ForexBrokers.ae - English Forex Brokers
Disclaimer: This page is for educational and informational purposes only. No trades are provided through the ones on this page. Despite this, ForexBrokers.ae takes great care in verifying the information it has on the site. However, the accuracy of this information cannot be guaranteed. Therefore, we recommend that you get advice from an independent financial expert. Trading in forex and binary options always carries some risk and is not recommended to all investors and traders. Before deciding to trade in foreign exchange, you must determine your investment goals, experience and your willingness to risk. You should know that there is a chance of losing all your first investment, so you should not invest in your money that you need. Read the complete citation