The cryptocurrency market had the worst start to the year in history, losing hundreds of billions of dollars in just a few days,

The cryptocurrency market had the worst start to the year in history, losing hundreds of billions of dollars in a few days, on December 31 bitcoin was trading at $46,500 now investors are making huge efforts to keep the price above $40 thousand.

This week, the benchmark cryptocurrency managed to break out of the last recession, and although it was not decisive, it recovered some losses, and is currently trading around $43,000 with a slight weekly increase.

It was Bitcoin price It hovered around the $41,000 level over the past week and very soon after only rose to $42,000, and on Monday (January 11th) it fell back to $40k, and since then, the leading cryptocurrency has taken a limited upside, rising to $44,000. dollars on Thursday.

Tightening of US monetary policy increases the losses of cryptocurrencies 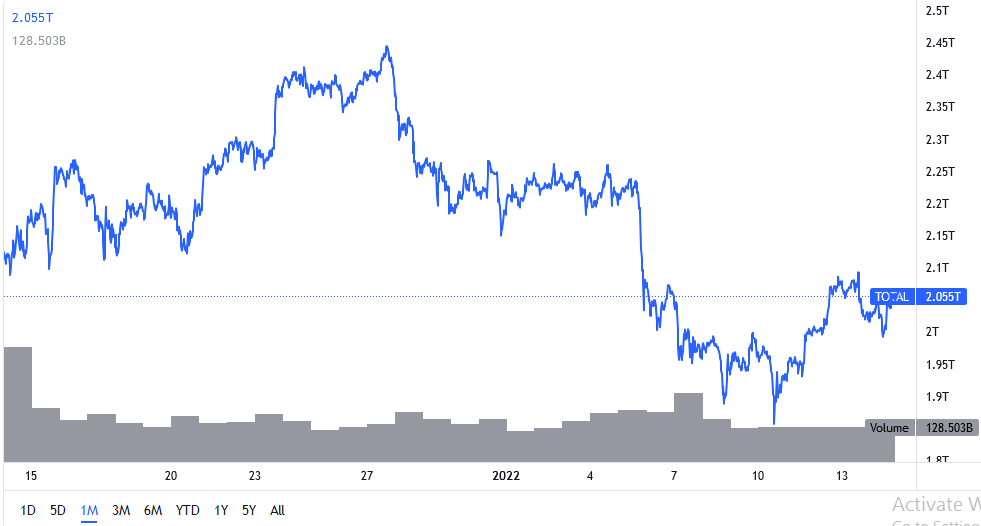 The recent sell-off in the cryptocurrency market is linked to the fundamental changes in the monetary policy stance of the Federal Reserve, as the regulator began taking decisive steps to combat inflationary pressure. Month.

During a December meeting, the Fed decided to speed up the tapering process and stop the "printing" in March, signaling that the bank intends to start raising interest rates.

Analysts saw more hawkish signals in the Federal Reserve's latest meeting minutes published on January 5, where they made clear that FOMC voting members are willing to act much more decisively than the market had predicted, as they forecast three rate hikes in 2022.

Currently, interest rate futures traders are pricing in a 71% chance that the Reserve Bank will raise the short-term target rate at its March meeting, a month ago, shortly after the omicron variable appeared. They estimated a probability of 32 %, moreover, of The Fed will likely cut its $8.8 trillion balance sheet next year after it doubled in size during the pandemic.

The hypothesis that the Federal Reserve's unprecedented stimulus policy contributes to the growth of the cryptocurrency market has long been supported, and therefore there is a relationship between the volume of cash injection into the economy by the world's central banks and the growth of riskier assets.

Currently the reverse process has begun, where liquidity is withdrawn from the market, for this reason, the tightening of monetary policy in the United States will affect the value of money and risk assets, remember that risky investments show the highest return during periods of market euphoria, but also show huge losses when the market enters in Panic.

Market participants believe that an increase in key interest rates in the United States will cause panic among investors, who are likely to reallocate their money to safe haven assets such as bonds and gold. Against this background, Bitcoin may find itself among the major risky assets that may risk falling to 30 thousand dollars.

Contents hide
1 Tightening of US monetary policy increases the losses of cryptocurrencies
2 Fed decision
Forex Brokers Offers
Your capital is at risk
The complete list of forex brokers
Trading with a regulated broker
Your capital is at risk
© All rights reserved 2022-2'13. ForexBrokers.ae - English Forex Brokers
Disclaimer: This page is for educational and informational purposes only. No trades are provided through the ones on this page. Despite this, ForexBrokers.ae takes great care in verifying the information it has on the site. However, the accuracy of this information cannot be guaranteed. Therefore, we recommend that you get advice from an independent financial expert. Trading in forex and binary options always carries some risk and is not recommended to all investors and traders. Before deciding to trade in foreign exchange, you must determine your investment goals, experience and your willingness to risk. You should know that there is a chance of losing all your first investment, so you should not invest in your money that you need. Read the complete citation