Bitcoin neared five-month highs and bragged to surpassing a $1 trillion market capitalization Thursday, extending gains after Bank of America described cryptocurrencies and other digital assets as "too big and important to ignore."

has been traded digital currency Leading today at about $54,790, up by 7 %, while the market capitalization was around $1.03 trillion, and over the past seven days the coin has added gains of more than 27%.

Cryptocurrencies made a new and big jump in price this week, especially Bitcoin, which crossed $55,000, hitting its highest level since April, and other cryptocurrencies followed suit. 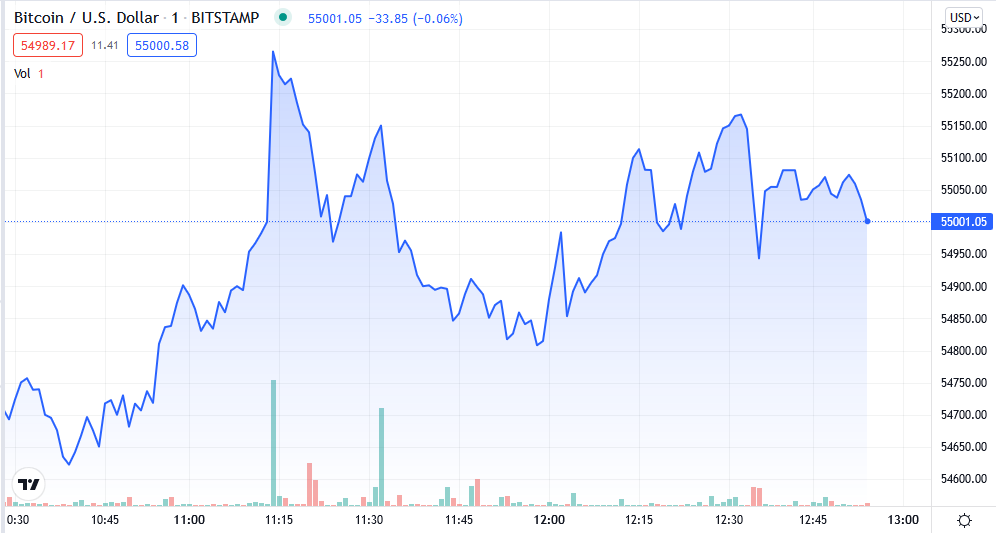 The latest reports have indicated that with the increasing interest of institutional investors in digital currencies, the global cryptocurrency market is expected to reach $4.94 billion by 2030 and this could add to the bullish crypto sentiment in October. Hashing has increased by more than 800% since the beginning of the year, and the leading cryptocurrency Bitcoin is likely to reach the price of $100,000 by the end of the year, which will surely give a boost to other cryptocurrencies.

In its first research report on cryptocurrencies, Bank of America said, “With a market capitalization of $2 trillion and more than 200 million users, the world of digital assets is too large and important to ignore, and we believe that crypto-based digital assets can form an entirely new asset class.” “.

Is it time to invest in digital currencies?

Historically, October has been a positive month for cryptocurrencies as it is usually bullish, and indeed Bitcoin advanced on Friday to its highest level since mid-September backed by positive investor sentiment, as well as supportive comments from US Federal Reserve Chairman Jerome Powell. .

The first on Thursday (September 30) testified before Congress that the Fed has no intention of banning cryptocurrencies, fueling optimism about the crypto market, the digital asset market is also benefiting from the seasonal impact in addition to positive market fundamentals in general, the quarter often sees The last of the year is a strong performance of digital assets, and we could see new all-time highs.

If you decide to invest in cryptocurrencies in October 2021, you should have Bitcoin on the list because the prices of other cryptocurrencies are usually correlated with them. Bitcoin is trading above $54,000, which indicates that the price could rise further, if the price breaks the strong resistance level that Standing at $55,000, the next target might be $60,000.

However, if the bitcoin price drops below the $50,000 support, it will act as a strong “sell” signal that will add further pressure on the entire crypto market.

Contents hide
1 Bitcoin and Optimistic Forecast
2 Is it time to invest in digital currencies?
Forex Brokers Offers
Your capital is at risk
The complete list of forex brokers
Trading with a regulated broker
Your capital is at risk
© All rights reserved 2022-2'13. ForexBrokers.ae - English Forex Brokers
Disclaimer: This page is for educational and informational purposes only. No trades are provided through the ones on this page. Despite this, ForexBrokers.ae takes great care in verifying the information it has on the site. However, the accuracy of this information cannot be guaranteed. Therefore, we recommend that you get advice from an independent financial expert. Trading in forex and binary options always carries some risk and is not recommended to all investors and traders. Before deciding to trade in foreign exchange, you must determine your investment goals, experience and your willingness to risk. You should know that there is a chance of losing all your first investment, so you should not invest in your money that you need. Read the complete citation