Bitcoin stabilizes above $60000, will it continue to rise?

The price of Bitcoin stabilized during today's trading, trading around the $61,500 range, after it suffered from a period of volatility following the news from the United States.

Bitcoin prices stabilized today, trading around the $61,500 range, after experiencing a period of volatility following the news from the US, while some cryptocurrencies have also fallen since yesterday. Solana is at an all-time high.

The total market capitalization of cryptocurrencies today has lost about $40 billion, though, and it is still well above $2.7 trillion.

Bitcoin performance over the past 24 hours 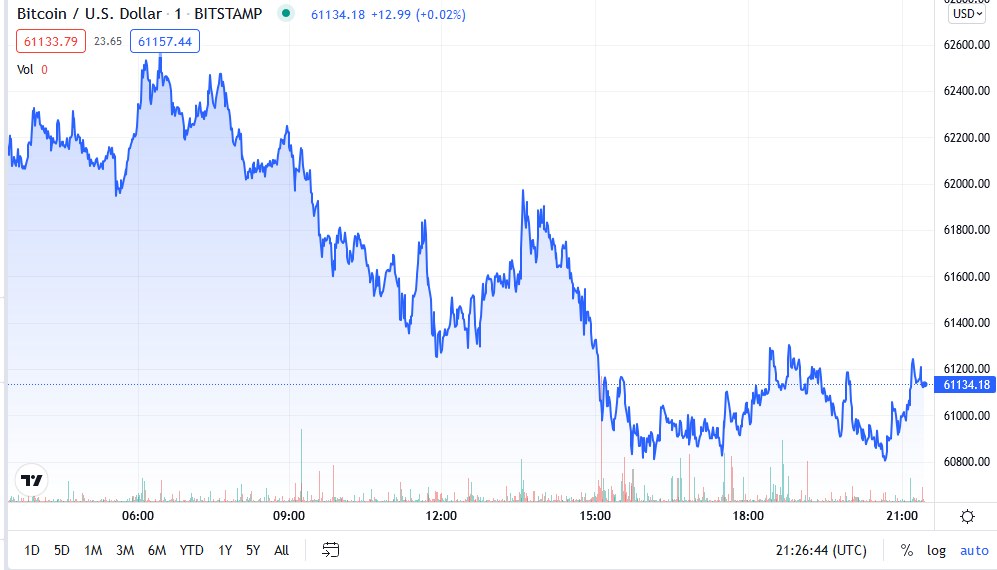 With the beginning of this November, it fell Leading digital currency To below the psychological support level of 60 thousand dollars, but it did not last long, and quickly reversed its direction to the upside, exceeding the price of 62 thousand dollars, but after a slight decline it jumped high to its highest levels since mid-October last at 64500 dollars.

However, it could not sustain its upward momentum and quickly stopped rising to near the $63,000 level, especially after the Fed's decision to start tapering its stimulus program.

Over the course of yesterday's trading, the leading currency lost around $3,000 to hit again at $60,000, but quickly rebounded and is currently trading in the $62,500 range.

The total market capitalization of the benchmark currency has reached above the $1.150 trillion level, and despite this, its dominance over other cryptocurrencies has fallen to 43%.

Will November see a new rise?

Historical data has shown that November was the highest month for Bitcoin, so many are wondering whether the currency will achieve historic highs during this month? In fact, most market experts expect the leading currency to continue its amazing gains and is likely to set new records that may seem To many surprising and amazing.

After the month of September, which inflicted Bitcoin with moderate losses of about 7%, everyone was optimistic about the month of October, as they expected it to record records, and indeed the currency recorded its highest levels ever near $ 67,000, to break its record level recorded in the month of April near $ 64,000, and the coin ended October is up over $61,000, so I have a monthly gain of about 40%.

These gains came in light of positive news supportive of the crypto market, which included good statements by Federal Reserve Chairman “Jerome Powell” and Chairman of the Securities and Exchange Commission “Gary Gensler”, where they confirmed that they would not ban Bitcoin, in addition to the approval of the Securities and Exchange Commission. The launch of a futures traded fund backed by bitcoin.

Historical data shows that November was the best performing month for Bitcoin with an average ROI of 66%, which adds to the pressure this month.

Over the past days, Ether has improved well, hitting an all-time high of around $4,700, but it quickly lost some of its gains and fell back to around $4,500.

Despite this, Solana continues its upward march, hitting a new record of over $240 earlier today, moreover, the total market cap has overtaken Tether to currently become the fourth largest cryptocurrency.

Contents hide
1 Bitcoin performance over the past 24 hours
2 Will November see a new rise?
3 Good performance of Ether coin and Solana coin making a record
Forex Brokers Offers
Your capital is at risk
The complete list of forex brokers
Trading with a regulated broker
Your capital is at risk
© All rights reserved 2022-2'13. ForexBrokers.ae - English Forex Brokers
Disclaimer: This page is for educational and informational purposes only. No trades are provided through the ones on this page. Despite this, ForexBrokers.ae takes great care in verifying the information it has on the site. However, the accuracy of this information cannot be guaranteed. Therefore, we recommend that you get advice from an independent financial expert. Trading in forex and binary options always carries some risk and is not recommended to all investors and traders. Before deciding to trade in foreign exchange, you must determine your investment goals, experience and your willingness to risk. You should know that there is a chance of losing all your first investment, so you should not invest in your money that you need. Read the complete citation