Bitcoin witnessed a significant decline during the month of December, as it recorded its lowest level below 42 thousand dollars, and is expected to close the year 2021 below the level of 5000$

December has been a difficult month for the bitcoin price as it hit a monthly low on December 4 at less than $42,000, one day left to the end of this year and it looks like the price will close 2021 below the $50,000 mark.

The total market capitalization of cryptocurrencies fell by $250 billion in three days, with the leading cryptocurrency dropping to its lowest level in ten days at $46,000.

since i registered digital currency All-time highs of $69,000 on November 10 were quickly rejected and started a downward movement. 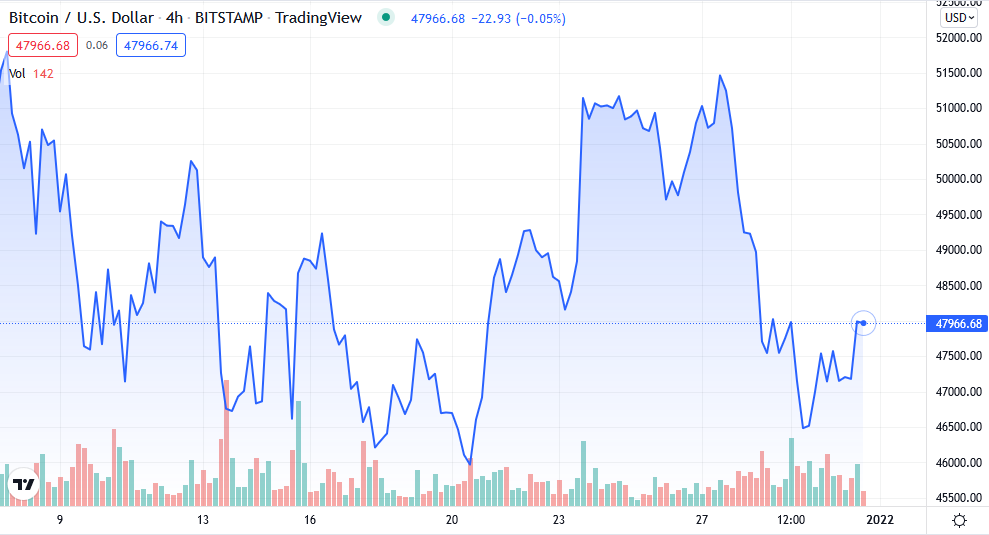 On December 27, Bitcoin made a rally and traded near a one-month high of $52,000, but it couldn't sustain its momentum.

Bitcoin has transformed itself from a speculative asset class into a store of value. The entire cryptocurrency market is measured against the performance of that leading currency. Many large institutions and even some countries now have a significant portion of Bitcoin in their portfolio.

Predicting the one-year price of Bitcoin can be a bit tricky, given the massive volatility associated with it, however, before the end of 2022 we may see it breach the $100,000 mark.

The exact value is difficult to predict although the coin's total market value will be in a range near the $1 trillion region for most of 2022 based on past price movements, it is unlikely that there will be a negative impact on panic selling in markets where a ban may be imposed. Private cryptocurrencies, because a large share of the demand is found in more developed markets such as the United States, Russia, Switzerland, Estonia and Australia.

The year 2021 was arguably one of the most happening years for Bitcoin and other crypto assets, the year not only saw a massive rise in the prices of many cryptocurrencies on different block chains, but also marked the beginning of a whole new era of NFTs and metaverses.

While no one knows exactly what the future holds for crypto assets, industry insiders are hoping for another fruitful year for this truly global phenomenon, with many saying that the cryptocurrency industry is just getting started, and even the oldest digital currencies Bitcoin is still in its early stage, and that more It may bring more stability.

There is certainly no lack of enthusiasm among cryptocurrency investors, but the uncertainty due to the lack of regulations, extreme volatility and the fact that all the hype around cryptocurrencies is not very old, leads to several types of fears among investors, especially those who cannot afford to lose.

So ideally, cryptocurrency investors should not put more than 5% to 7% from their crypto portfolio, and portfolio diversification is another pillar that helps guard against unforeseen events.

Contents hide
1 Bitcoin drops to $46,000
2 The future of crypto 2022
Forex Brokers Offers
Your capital is at risk
The complete list of forex brokers
Cryptocurrency Offers
Your capital is at risk
Trading with a regulated broker
Your capital is at risk
© All rights reserved 2022-2'13. ForexBrokers.ae - English Forex Brokers
Disclaimer: This page is for educational and informational purposes only. No trades are provided through the ones on this page. Despite this, ForexBrokers.ae takes great care in verifying the information it has on the site. However, the accuracy of this information cannot be guaranteed. Therefore, we recommend that you get advice from an independent financial expert. Trading in forex and binary options always carries some risk and is not recommended to all investors and traders. Before deciding to trade in foreign exchange, you must determine your investment goals, experience and your willingness to risk. You should know that there is a chance of losing all your first investment, so you should not invest in your money that you need. Read the complete citation