Bitcoin price held steady after hawkish Fed and Bank of England decisions, as the price of the coin is in a tight range

Bitcoin price remained flat after hawkish Fed and Bank of England decisions, with the price of the coin in a tight range as investors reflect the relatively hawkish environment among the world's largest central banks. $39620.

Bitcoin is under stricter measures 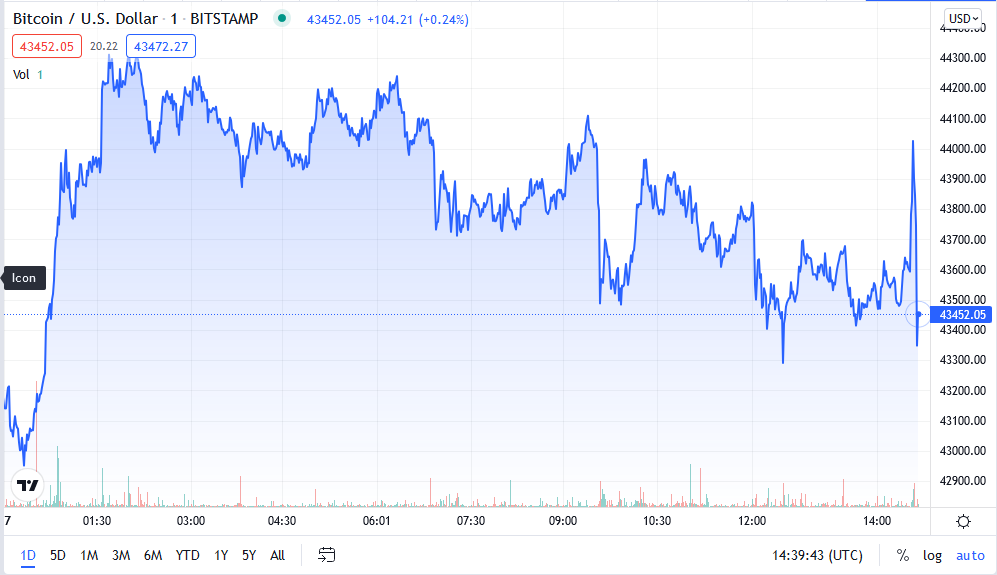 price stabilized Bitcoin During this week, as the week was relatively full of decisions by major central banks, on Wednesday the Bank of Japan made a relatively moderate decision on interest rates, leaving interest rates and the quantitative easing program at the same levels unchanged, on the same day, the Fed concluded its meeting looking hawk Relatively speaking, he also decided to leave the policy of rates and quantitative easing as is without adding any modifications.

However, in the accompanying statement, the bank said it expects a slight rise in interest rates between 2022 and 2024, and will also start ending quantitative easing purchases in 2022.

On Thursday, the Bank of England ended its regular meeting and also decided to leave its monetary policy framework at the same current levels unchanged, but the governor stressed that some slight tightening was needed, so the Bank is now expected to start tapering off by December and raise interest rates in March. .

Elsewhere, in Norway the Bank of Norway became the first major central bank to raise interest rates, with the bank increasing rates from 0% to 0.25%, and other central banks making their decisions this week include the Swiss National Bank (SNB) and the South African Reserve Bank (SNB). SARB), and the Brazilian Central Bank.

The decisions of central banks especially the Federal Reserve and the Bank of England are important to the price of the digital currency Bitcoin, historically, risky assets such as Bitcoin and Ethereum tend to perform well in the period of easy money policies.

China is taking another major step against the cryptocurrency industry, by declaring all cryptocurrency transactions illegal, users are no longer allowed to access even those digital exchanges that operate outside the country, and this new move is likely to cause large amounts of capital to leave. Money for China and heading to Western countries.

For many years now, China has had a difficult relationship with the cryptocurrency industry, however, with the passage of time that relationship started to get worse, especially now that the country is about to issue its own cryptocurrency on a national scale, and therefore, all cryptocurrencies should be phased out. The other, which may be a competition for the upcoming digital yuan.

Over the course of this year, the country has been removing miners from its country, the majority of bitcoin miners came to China because of the cheap electricity, and now its anti-crypto campaign has reached a new level as the country has officially made all crypto transactions illegal.

According to a recent statement issued by the Central Bank of China, Bitcoin, Ethereum, Tether and all other digital currencies are completely banned in the market, all crypto-related activities are prohibited and illegal in the country, the only thing people residing in China can do with cryptocurrency is owning it and nothing else .

Contents hide
1 Bitcoin is under stricter measures
2 China declares all crypto transactions illegal
Forex Brokers Offers
Your capital is at risk
The complete list of forex brokers
Trading with a regulated broker
Your capital is at risk
© All rights reserved 2022-2'13. ForexBrokers.ae - English Forex Brokers
Disclaimer: This page is for educational and informational purposes only. No trades are provided through the ones on this page. Despite this, ForexBrokers.ae takes great care in verifying the information it has on the site. However, the accuracy of this information cannot be guaranteed. Therefore, we recommend that you get advice from an independent financial expert. Trading in forex and binary options always carries some risk and is not recommended to all investors and traders. Before deciding to trade in foreign exchange, you must determine your investment goals, experience and your willingness to risk. You should know that there is a chance of losing all your first investment, so you should not invest in your money that you need. Read the complete citation