Bitcoin Falls as Geopolitical Tensions Grow Between Russia and Ukraine

The price of Bitcoin fell below $40,000 during trading last Friday, amid uncertainty in global markets.

Bitcoin price fell below $40,000 during trading last Friday amid a state of uncertainty in global markets, as it fell by 4.6% and traded at $39,700, and continued to weaken until it settled slightly above $38,000.

Ethereum, Solana, and many other assets also suffered larger losses than Bitcoin, with Ethereum losing about 5.3 % on Friday, while Solana, Avalanche and Terra all down by 5.9 %, 7.8 % and 8.1 % respectively.

The latest drop comes on the heels of weeks of volatile price movements in the . market CryptoAlthough Bitcoin and other digital assets have at times shown bullish momentum, most assets are trading well below their record highs.

Bitcoin is trading about 42 % less than its all-time high of $69,000 it broke on November 10, while Ethereum is trading 42.2 % less than it topped $4,800 on the same day, Solana is down 64.9% from its high, And many assets with lower capitalization have performed worse, for example: Dogecoin is trading 81.1% lower than its all-time high, the recent drop puts the global cryptocurrency market cap at around $1.9 trillion, down more than 36.6% from its peak of $3 trillion. 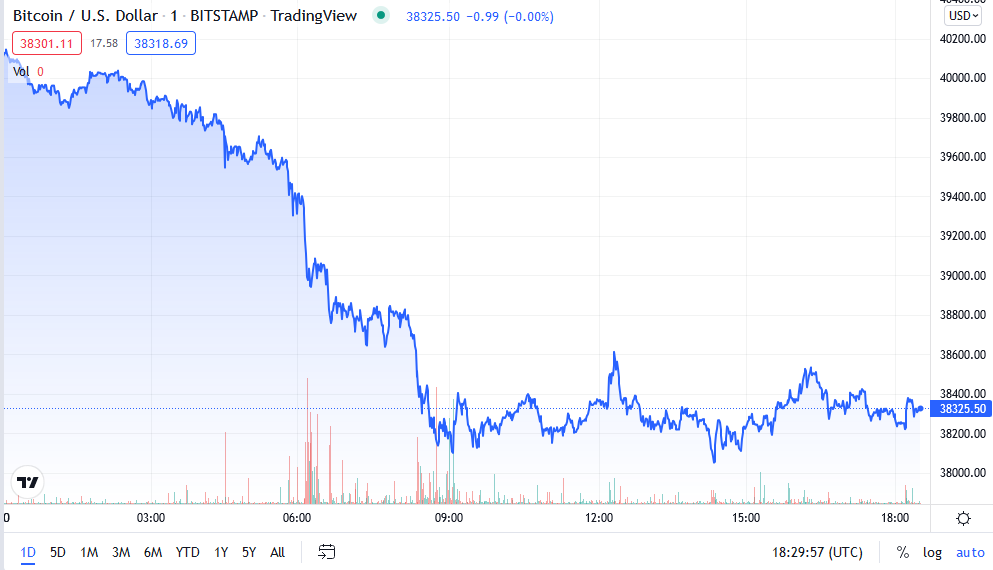 Several major macroeconomic events have weighed on cryptocurrencies in recent weeks, in December the market plunged amid fears of the Omicron variable, before news of a planned interest rate hike by the Federal Reserve caused another pullback.

The market has seen volatility around the recent Federal Reserve meetings with growing expectations of the first rate hike next March, meanwhile, the Biden administration's issuance of an executive order on regulating cryptocurrency has been confirmed next week, and ongoing tensions over the Russia-Ukraine conflict have weighed on market sentiment. Financials in general, outside of cryptocurrencies, the S&P 500, Dow Jones and Nasdaq 100 are also down 0.41%, 0.3% and 0.82% respectively on Friday.

Although Bitcoin and most of the cryptocurrency market have had a tough few weeks, some digital assets are challenging the trend. In which major assets to make new highs, Bored Ape Yacht Club NFTs bottom price crossed 100 ETH for the first time last month, while other coveted avatar-based groups like Azuki and mfers soared, even as ethereum traded below an all-time high, However, dedicated NFT collectors are betting that 2022 could be another big year for the new asset class.

Contents hide
1 Reasons for Bitcoin's Recent Losses
2 NFT Market Shows Reversal of Major Crypto Assets
Forex Brokers Offers
Your capital is at risk
The complete list of forex brokers
Trading with a regulated broker
Your capital is at risk
© All rights reserved 2022-2'13. ForexBrokers.ae - English Forex Brokers
Disclaimer: This page is for educational and informational purposes only. No trades are provided through the ones on this page. Despite this, ForexBrokers.ae takes great care in verifying the information it has on the site. However, the accuracy of this information cannot be guaranteed. Therefore, we recommend that you get advice from an independent financial expert. Trading in forex and binary options always carries some risk and is not recommended to all investors and traders. Before deciding to trade in foreign exchange, you must determine your investment goals, experience and your willingness to risk. You should know that there is a chance of losing all your first investment, so you should not invest in your money that you need. Read the complete citation