Bitcoin deepens its losses to reach below $56,000

Bitcoin witnessed a significant decline, as it recorded a monthly low at the level of 56000 dollars, and the total market value lost about 400 billion dollars.

Bitcoin witnessed a significant decline as it recorded a monthly low at the level of 56000 dollars, and the total market value of cryptocurrencies lost about 400 billion dollars within a week, as the correction of the cryptocurrency market continues to deepen.

Cryptocurrency prices suffered from continued price declines throughout this week, especially during today’s trading, with the leading cryptocurrency sliding to its lowest level in five weeks at $ 55,700, and most altcoins colored red, and as a result the total market value lost about 100 billion extra dollars.

Bitcoin is currently trading down 18.5 percent % from its all-time high, which it hit just nine days ago. 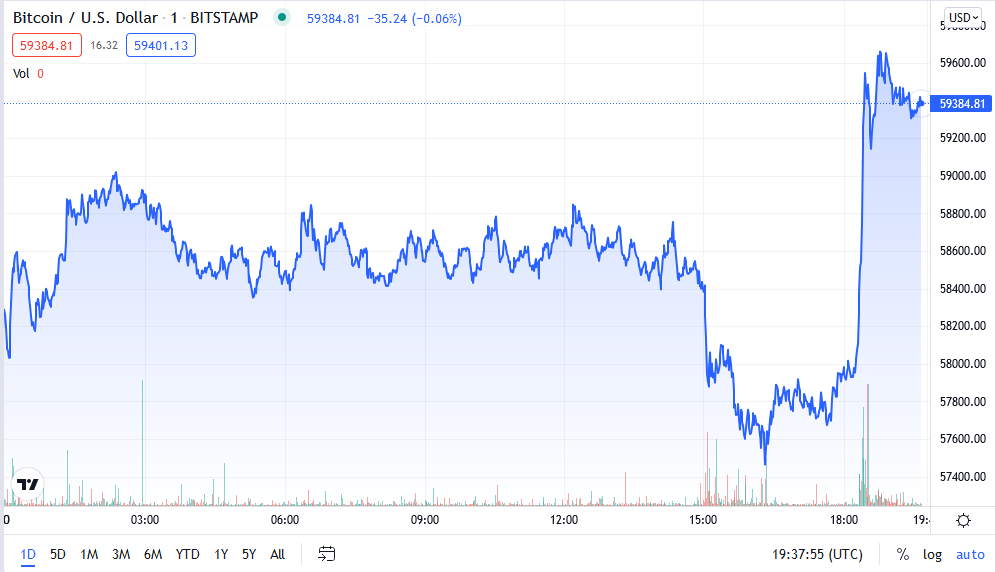 Since I crossed digital currency The leader reached an all-time high at around $69,000 during last week’s trading, a strong sell-off dominated the crypto market that pushed the cryptocurrency to lose nearly $6000 in minutes after reaching its peak, and it could not recover after one day and continued to backing down.

But it was able to recover some of its losses earlier this week to cross the psychological support level of $66,000 for a brief period. Despite that, it was unable to maintain its upward momentum and reversed to the downside, causing the currency to lose about $7,000 on the same day, in this way, to fall to Below $60,000 for the first time since the end of October.

Bitcoin later attempted to recover but failed to reverse, and fell again, falling to $55,700, its lowest in nearly five weeks.

During today's trading, Bitcoin managed to recover some of its losses and is currently standing above $57,000, and despite a limited recovery its total market capitalization is well below $1.1 trillion, and its dominance of altcoins has also seen its dominance drop below 43%.

Over the past seven days, bitcoin has fallen by more than 10%, bringing the cryptocurrency below $56,000 for the first time since late October, as millions of long and short positions were liquidated due to volatility. to concerns.

Of course, this had an impact on the entire crypto market, as most coins are also charting double-digit declines over the past seven days, with Ethereum losing around 10.7%, BNB, SOL, ADA and XRP all dropping around 10%.

Altcoins suffered during the trading week last week, and so far most of them are still in the red, and despite this, their losses are less than the leading coin.

Ethereum fell below $4,000 for a while, but is currently standing at $4,150, and Binanso, Solana, Cardano, Ripple, Dogecoin, Litecoin, Polkadot, and ShibaInu also fell slightly.

The total market value of cryptocurrencies has fallen to $2.650 trillion, as the total market capitalization has lost about $400 billion since it reached its peak about a week ago.

Contents hide
1 Bitcoin hits five-week low
2 Altcoin losses
Forex Brokers Offers
Your capital is at risk
The complete list of forex brokers
Trading with a regulated broker
Your capital is at risk
© All rights reserved 2022-2'13. ForexBrokers.ae - English Forex Brokers
Disclaimer: This page is for educational and informational purposes only. No trades are provided through the ones on this page. Despite this, ForexBrokers.ae takes great care in verifying the information it has on the site. However, the accuracy of this information cannot be guaranteed. Therefore, we recommend that you get advice from an independent financial expert. Trading in forex and binary options always carries some risk and is not recommended to all investors and traders. Before deciding to trade in foreign exchange, you must determine your investment goals, experience and your willingness to risk. You should know that there is a chance of losing all your first investment, so you should not invest in your money that you need. Read the complete citation