Bitcoin is trading in a narrow range, will it go back up?

Bitcoin is in relative stability as it trades in the $43,000-$45,000 range, as the market awaits hints that could spark bullish or bearish momentum.

Bitcoin is in relative stability as it trades in a range between $43,000 and $45,000, as the market awaits hints that could spark either bullish or bearish momentum. If the leading cryptocurrency continues to rise, it could be met with a severe resistance level at $46,000-$48,000, and above this level it will likely see significant pressure towards the $50,000 level.

Bitcoin has been in a gradual decline since November when the Federal Reserve announced its intentions to tighten monetary policies, but on January 21 the oldest cryptocurrency fell to its lowest level in six months to reach the $33,000 region, after about two weeks, on February 4 employment figures raised The US came in with a better-than-expected four-day rally, during which the king of cryptocurrencies grew by 18%. 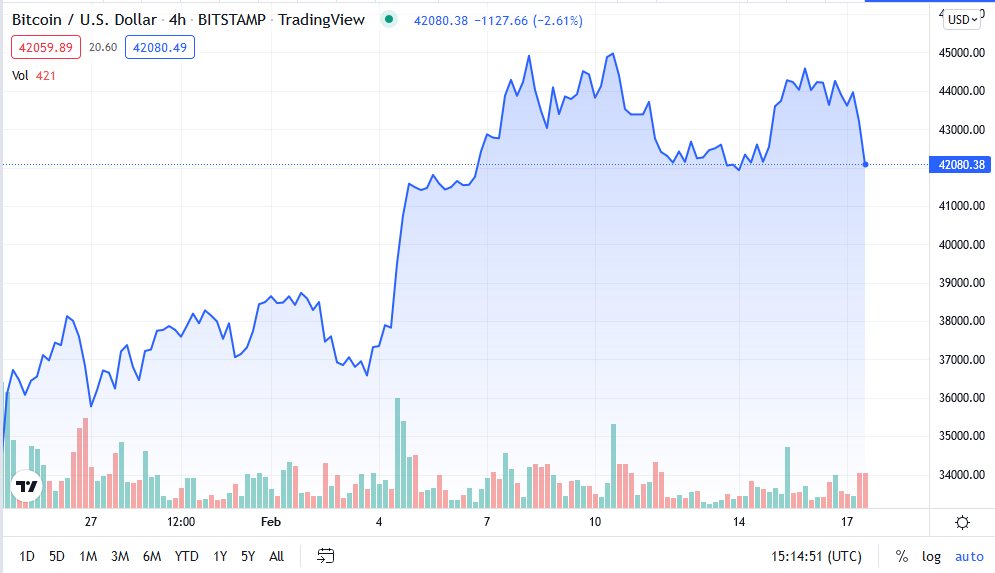 After hitting a six-month low in January, Bitcoin has rebounded by 36.5% in two weeks, and is currently trading near the $45,000 level.

Over the past weekend, Bitcoin was unable to break through $46,000 and continue the recovery it witnessed in the previous week, and the coin headed lower over the weekend and fell below $42,000 on several occasions in a few days.

However, I managed Bitcoin It reversed its downtrend and maintained its bullish momentum and started to regain its strength after bouncing back to the $42,000 level, which resulted in adding $2,000 yesterday, but the asset continued to rise in the following hours and approached $45,000 during Wednesday's trading, despite its refusal to cross At $45,000, Bitcoin remains above $44,000.

As such, the total market capitalization of Bitcoin is approaching $850 billion after dropping below $800 billion a few days ago.

Russian Finance Minister Anton Siluanov believes that banning cryptocurrencies, like banning the internet, is equally impossible. Russia is one of the countries where the regulatory status of Bitcoin and the general cryptocurrency market remains questionable at best. Anton Siluanov does not think banning it is an option on the table.

The central bank wants to take digital assets and digital currencies and ban them on the grounds that this creates risks, can “infect” financial institutions and banks and create an opaque settlement market, Siluanov argued that the risks the central bank is talking about is understandable, but once again emphasized that banning the sector is much worse than regulating it , This is in line with the recent statements of the authority.

Earlier in February, the Russian government announced that the ministry was preparing a draft law and even defined cryptocurrency as an “analog of currencies.”

However, there is still no solution after a meeting between Elvira Nabiullina (President of the Bank of Russia), Anton Siluanov and Dmitry Grigorenko (Deputy Prime Minister), where they discussed the situation in a joint meeting but failed to reach an agreement.

Contents hide
1 Bitcoin trades above $44k
2 Russian Finance Minister Says Banning Cryptocurrency Is Like Banning Internet
Forex Brokers Offers
Your capital is at risk
The complete list of forex brokers
Trading with a regulated broker
Your capital is at risk
© All rights reserved 2022-2'13. ForexBrokers.ae - English Forex Brokers
Disclaimer: This page is for educational and informational purposes only. No trades are provided through the ones on this page. Despite this, ForexBrokers.ae takes great care in verifying the information it has on the site. However, the accuracy of this information cannot be guaranteed. Therefore, we recommend that you get advice from an independent financial expert. Trading in forex and binary options always carries some risk and is not recommended to all investors and traders. Before deciding to trade in foreign exchange, you must determine your investment goals, experience and your willingness to risk. You should know that there is a chance of losing all your first investment, so you should not invest in your money that you need. Read the complete citation