Expectations for the continuation of the bearish trend for the USD/JPY currency pair amid the lower statutory industrial index reading.

On Sunday, at 11:50 pm GMT, the Japanese Cabinet Office released the National Quarterly GDP figures, which measure changes in the value of all goods and services produced by the Japanese economy during the last quarter. This figure is usually published after adjusting for inflation and is considered one of the leading economic indicators. Since GDP figures were published

Initial total for the first time, it usually has the largest impact on the market. Hence, forex brokers consider this indicator as a leading indicator of the Japanese economy

Last quarter, Japanese GDP came in at 0.3% and expectations for this quarter were set at -0.3%. However, the actual figure came in slightly lower than what the market expected at -0.4%.

Today, at 01:30 PM GMT, the Federal Reserve Bank of New York released the Empire State Manufacturing Index which measures the level of the Diffusion Index by surveying 200 manufacturers in New York State.
Since companies are the first to be affected by changing market conditions, binary options investors consider this study as the most important leading indicator of New York's economic health. Since New York constitutes a large part of the US economy, it can indicate the larger trend in the US economy in general.
Last month, the Empire State Manufacturing Index came in at -19.4 and expectations for this month were optimistic at -10.5. However, the actual reading of the index came in much worse than the market had expected at negative -16.6. 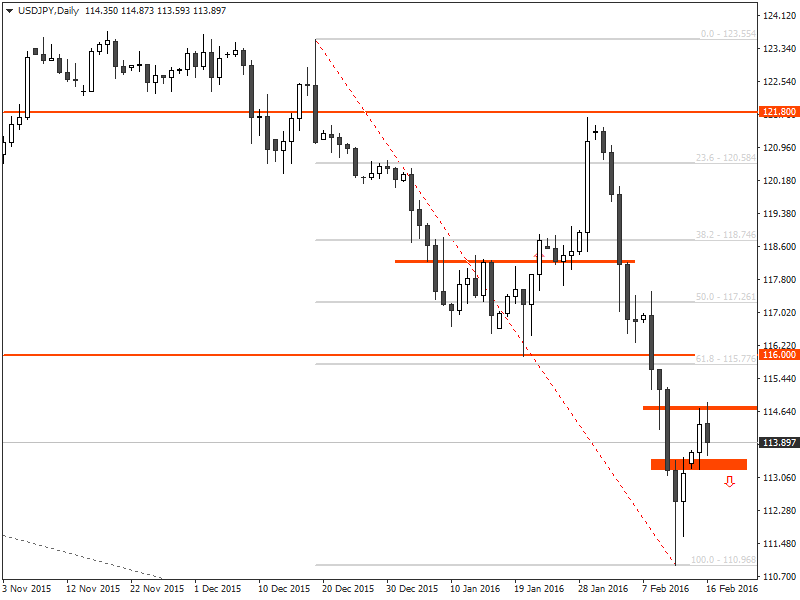 After reaching near the resistance level at 121.80 on January 29th, the USD/JPY started a sharp decline, pushing the price towards the 111.00 level.

Last week, after reaching near 111.00, the USD/JPY started rebounding, and so far this pair has risen about 400 pips. However, as the US Empire State Manufacturing Index came in much worse than expected, the fundamental outlook for the USD/JPY is likely to remain bearish this week.

Under these circumstances, it would be advisable for binary options traders to consider placing a sell order for the USD/JPY currency pair with their binary options once the price closes below the 113.25 level.

Contents hide
1 Japan - GDP
2 United States - Empire State Manufacturing Index
3 Trading recommendations for the USD/JPY currency pair
Forex Brokers Offers
Your capital is at risk
The complete list of forex brokers
Trading with a regulated broker
Your capital is at risk
© All rights reserved 2022-2'13. ForexBrokers.ae - English Forex Brokers
Disclaimer: This page is for educational and informational purposes only. No trades are provided through the ones on this page. Despite this, ForexBrokers.ae takes great care in verifying the information it has on the site. However, the accuracy of this information cannot be guaranteed. Therefore, we recommend that you get advice from an independent financial expert. Trading in forex and binary options always carries some risk and is not recommended to all investors and traders. Before deciding to trade in foreign exchange, you must determine your investment goals, experience and your willingness to risk. You should know that there is a chance of losing all your first investment, so you should not invest in your money that you need. Read the complete citation