The main supporter of the World Fighting Championship, CoinW, witnessed the new champion of Kunlun Fighting!

A city square in Dubai was filled with rafters on the night of June 25, 2022, as thousands of Kunlun Fight fans gathered to witness the most fierce fighting night in Kunlun Fighting history.

A city square in Dubai was filled with rafters on the night of June 25, 2022, as thousands of Kunlun Fight fans gathered to witness the most fierce fighting night in Kunlun Fighting history.

Sponsored by CoinW, the world’s leading cryptocurrency exchange, the Kunlun Fight & Chan FC World Fighting Championship brought international fighters from France, Italy, Belarus, Turkey, Iran and many other countries to deliver a blood clotting feast for the senses, to the fighting fans.

Witnessed CoinW The new hero in the Battle of Kunlun on the last night!

The highlight of the final night was undoubtedly the confrontation between Belarusian national champion Dzianis Zuev and Muay Thai star from France Jeremy Payet.

As the first king of Kunlun Fight, Zuev showed a strong desire to attack early in the match, with high quality in both medium and long range attempts, as well as close encounters and counterattacks. As the match progressed, Zuev took the opportunity to hit Payet with a backhand, successfully killing his opponent and beginning his first win since his return to the Kunlun Final to cheers and applause from the crowd. 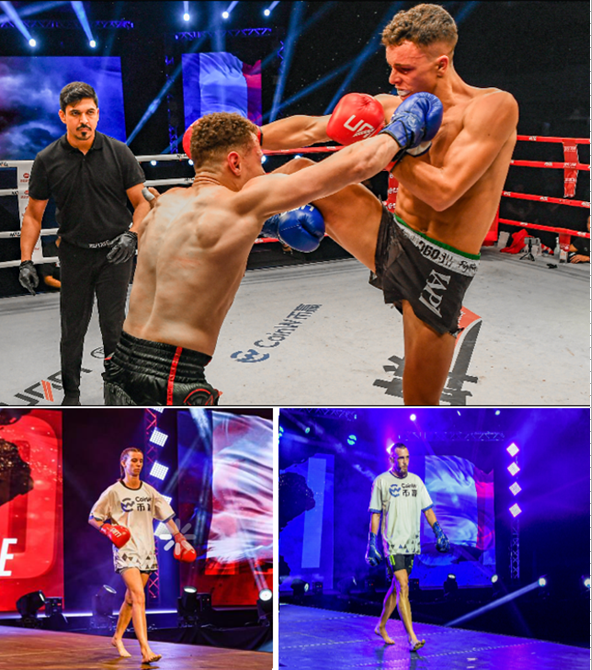 CoinW partners with Kunlun Fight, leading a new trend in the digital world!

The Kunlun World Fighting Championship began in 2014, breaking with the ingrained paradigm, and brought a storm of volatility to the global fighting community. With the authenticity of the real battles between Chinese and foreign athletes and a sense of honor between countries. He has won public attention and appreciation, and has secured investments from venture capital institutions such as Morningside Capital led by IDG and Northern Light Venture Capital.

Founded in 2017, CoinW (www.coinw.com) has established 16 local service centers in 13 countries around the world, providing comprehensive crypto asset services such as spot contracts and ETFs to 7.5 million users worldwide. CoinW holds Lithuanian Financial Regulatory License, US MSB Financial License, Singapore MAS License, SVGFSA License, Abu Dhabi FSRA Financial License and many other national and regional financial regulatory licenses. CoinW has financial regulatory licenses from many countries and regions, including Lithuania, US MSB, Singapore MAS, SVGFSA, Abu Dhabi FSRA, etc., and has never stopped its global compliance. The core members of the platform are among the first investors in crypto assets. The platform insists on selecting high-quality crypto assets for investors, creating a new technology financing model for users and leading the new trend of industry products.

One is Kunlun Fight, which is leading the trend of global combative development with the standards of high-quality events, and the other is CoinW, which is committed to spearheading the new trend of the crypto-asset industry. Industry leaders collaborate to open a new chapter of cross-industry collaboration. Bilateral empowerment and win-win cooperation amplify the international influence of both the Kunlun Fighting and Queen W brands.

The naming of the Kunlun World Fighting Championship is also another step in the internationalization of the CoinW brand after the successful landing of a La Liga ad on the field. After successive major operations, CoinW has become one of the cryptocurrency brands that actively participate in sporting events.

NFTs are loved and sought after by more and more young people, representing the new trend and new culture. It is understood that CoinW will also partner with Kunlun Fight to offer a limited NFT, with 999 limited collectibles up for sale in the first phase, which will be available to the public on Opensea on June 26.

This limited NFT takes the form of an airdrop, and interested users can join the community (https://t.me/CoinWNFT) and complete a task for the opportunity to earn an NFT purchase qualification and a gas fee. NFT holders can enjoy the rights and benefits of CoinW VIP membership and also get a Futures Bonus.

Fighting + Crypto, what are the sparks?

Cryptocurrency is a very fast-growing and emerging field, and since the introduction of Bitcoin, more and more countries have introduced incentives regarding cryptocurrencies. The rise of the cryptocurrency represents the relentless pursuit of fairness and justice for humanity.

According to Nielsen’s latest Global Sports Marketing Report, the total number of transactions between cryptocurrency and sports companies increased by 110% between 2019 and 2021. Nielsen analysts predict that blockchain companies will spend $5 billion on sports sponsorships in 2026, an increase of 778% over the year 2021.

The CoinW CEO said: “With the CoinW brand expanding globally, we are excited to partner with a top-tier sporting event like the Kunlun Fight. We also hope that with this title, we can further promote the use of cryptocurrencies in sports and make the public more and more knowledgeable about cryptocurrencies, so that they can become mainstream. “

The frequent participation of the crypto sector in sporting events means that cryptocurrency is becoming more popular, more and more countries and tech start-ups are embracing this new space, and crypto brands represented by CoinW are slowly becoming mainstream.

Contents hide
1 CoinW witnessed the new champion in the Battle of Kunlun on the last night!
2 CoinW partners with Kunlun Fight, leading a new trend in the digital world!
3 Fighting + Crypto, what are the sparks?
Forex Brokers Offers
Your capital is at risk
The complete list of forex brokers
Trading with a regulated broker
Your capital is at risk
© All rights reserved 2022-2'13. ForexBrokers.ae - English Forex Brokers
Disclaimer: This page is for educational and informational purposes only. No trades are provided through the ones on this page. Despite this, ForexBrokers.ae takes great care in verifying the information it has on the site. However, the accuracy of this information cannot be guaranteed. Therefore, we recommend that you get advice from an independent financial expert. Trading in forex and binary options always carries some risk and is not recommended to all investors and traders. Before deciding to trade in foreign exchange, you must determine your investment goals, experience and your willingness to risk. You should know that there is a chance of losing all your first investment, so you should not invest in your money that you need. Read the complete citation