Bitcoin closed last week's trading with its worst losses since the global market defeat in March 2020, which led to expectations of entering a bearish phase.

Bitcoin closed last week with its worst losses since the global market defeat in March 2020, fueling speculation that the cryptocurrency was about to enter a corrective bearish phase. Monday.

The recent selloff in the cryptocurrency emerged against volatile moves in government bond markets, as the surge in yields last week called into question the possibility of a prolonged period of low interest rates, which underpinned Bitcoin's rally last year.

However, with the supportive fundamentals brewing in the cryptocurrency space, analysts are increasing expectations that Bitcoin will post another upward trend towards its previous highs.

Bitcoin is a global digital store

The leading cryptocurrency in 2021 transformed from a speculative risk asset into a global digital store of value. The US dollar in depreciation and a store of value in place of gold.

Bitcoin has been on an uptrend for a whole year now, with its price surging from under $4,000 to over $50,000 at the current peak, and with analysts expecting a higher value closer to $100,000 or much higher, it's hard to be bearish. previous lows. 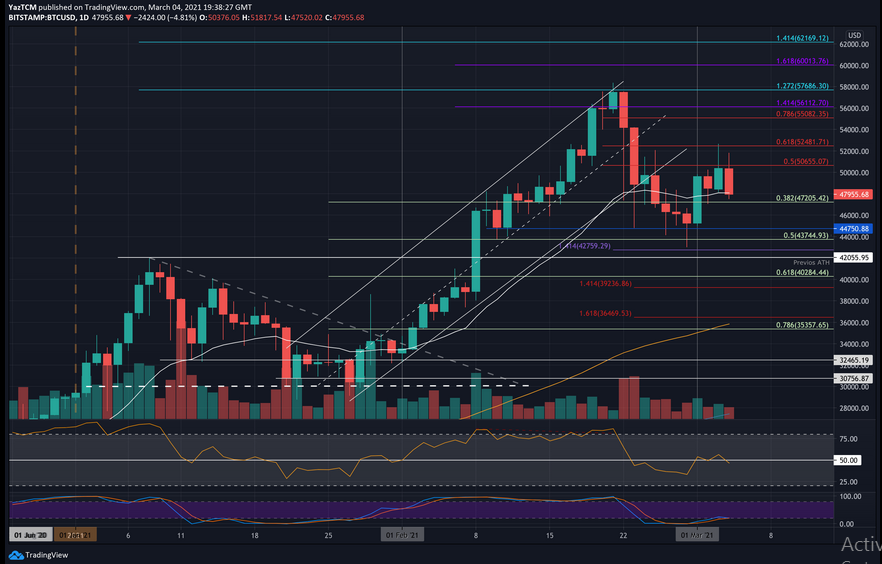 The currency boom not only came from retail investors again, but this time it managed to finally attract institutional investors, the effect that the high net worth investor class had on price increases was dramatic, resulting in a rally of more than 1,000% within a year. Bitcoin is currently up nearly 70% year-to-date.

Outflows from cryptocurrency exchanges crossed over 10,000 BTC in a week and have yet to subside, although the price action has stalled recently, and both metrics and techniques in the chain seem to support a sustained uptrend for a longer period.

The leading cryptocurrency in 2021 managed to surpass the previous target price threshold of $50,000 and market capitalization of $1 trillion in just two months of this year, driven by rising demand against declining supply and an increasingly favorable macroeconomic environment, the report notes that Bitcoin has matured as a category The assets could reach the $100,000 price threshold by the end of 2021.

Recent reports indicate that the relative volatility of the cryptocurrency is declining against gold, and if emerging digital assets continue to behave similarly, their volatility will be lower than that of Amazon and other stocks within two years.

It is also reported that the current price volatility and selling is mainly coming from retail investors which is quite similar to the selling pattern of early 2017, but in the long run these weak sellers will outnumber them.

Bitcoin price is likely to continue rising 55 to 15 times as supply decreases after each block reward halving.

Contents hide
1 Bitcoin is a global digital store
2 $100,000 Could Be Bitcoin's Next Threshold
Forex Brokers Offers
Your capital is at risk
The complete list of forex brokers
Trading with a regulated broker
Your capital is at risk
© All rights reserved 2022-2'13. ForexBrokers.ae - English Forex Brokers
Disclaimer: This page is for educational and informational purposes only. No trades are provided through the ones on this page. Despite this, ForexBrokers.ae takes great care in verifying the information it has on the site. However, the accuracy of this information cannot be guaranteed. Therefore, we recommend that you get advice from an independent financial expert. Trading in forex and binary options always carries some risk and is not recommended to all investors and traders. Before deciding to trade in foreign exchange, you must determine your investment goals, experience and your willingness to risk. You should know that there is a chance of losing all your first investment, so you should not invest in your money that you need. Read the complete citation