Bitcoin is rising again after the sudden recession last week

After the sudden stagnation in Bitcoin last week, it managed to break the psychological support level of $10,000 again, to be able to rise over the past few days.

On August 28, Bitcoin fell Q8 Trade Suddenly by $600 within half an hour to drop below the $10,000 level, continuing its decline and recording its lowest level in three weeks at $9,362, and some believe that the reason is the lack of interest of investors as they did not treat Bitcoin as a safe haven asset against slowing economic growth, and the price has slowly recovered Since then, it is currently trading at $10,099, up by 5.21% in today's trading.

At the end of August, the bitcoin currency recorded the second consecutive monthly decline, with losses amounting to about 5%, in light of the weak investment demand to buy bitcoin with the absence of catalysts supporting the digital market. 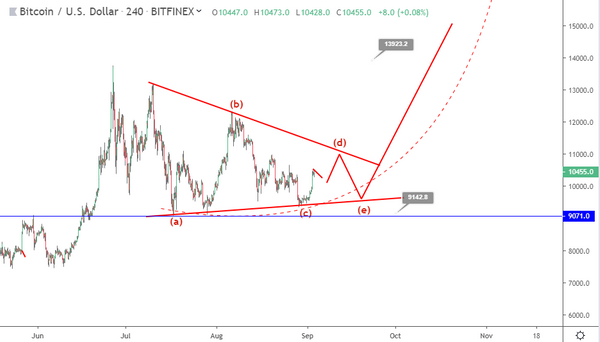 Some analysts believe that the bitcoin currency failed once again in the safe-haven test. Last Friday, with the escalation of trade tensions between the United States and China and the decline in global stock markets, investors resorted to cash safe havens, as the Japanese yen, the Swiss franc and gold rose, and the bitcoin currency fell by Stock prices exceeded.

Cryptocurrency investor and Galaxy Digital CEO Mike Novogratz said Bitcoin is in the support phase, predicting that the imminent participation of institutional investors in the crypto industry will fuel the next phase of the bullish run.

Last week, Bakkt announced the launch of its bitcoin futures trading platform, and that it will begin accepting deposits against its reserve service Bakkt Warehouse on September 6.

Bitcoin and the next target

Speculators are willing to put faith in Bitcoin as a hedge against a liquidity crunch. This assumption finds support in a series of catalysts that could push the value of the cryptocurrency higher, including Intercontinental Exchange-backed digital asset platform Bakkt that will begin offering Bitcoin futures either Daily or monthly as of September 23, analysts believe the launch will flock to Wall Street investors into the cryptocurrency market.