Is Bitcoin about to regain its pre-coronavirus highs?

Although Bitcoin and other crypto assets have lost tremendous value in a short period of time, they are rebounding strongly while other financial markets continue to struggle.

Bitcoin rose today strongly by about 7.5% to currently trade above the level of $6,700, with the Federal Reserve announcing unprecedented stimulus measures, which it intends to take to combat the economic threat posed by the Corona virus to the global economy, and both gold and stocks responded relatively positively with those statements.

Bitcoin is falling as governments escalate

And it seems that this great collapse of Bitcoin is linked to the wide risks caused by the Corona virus and its spread in most countries of the world, unlike previous speculations, and this also happened in the stock markets, which experienced the worst crisis in its history since the global financial crisis in 2008, as investors’ fears escalated IQ OptionFrom the deep negative repercussions that the Corona virus will leave on the global economy, which resulted in a massive selling in high-risk financial markets. 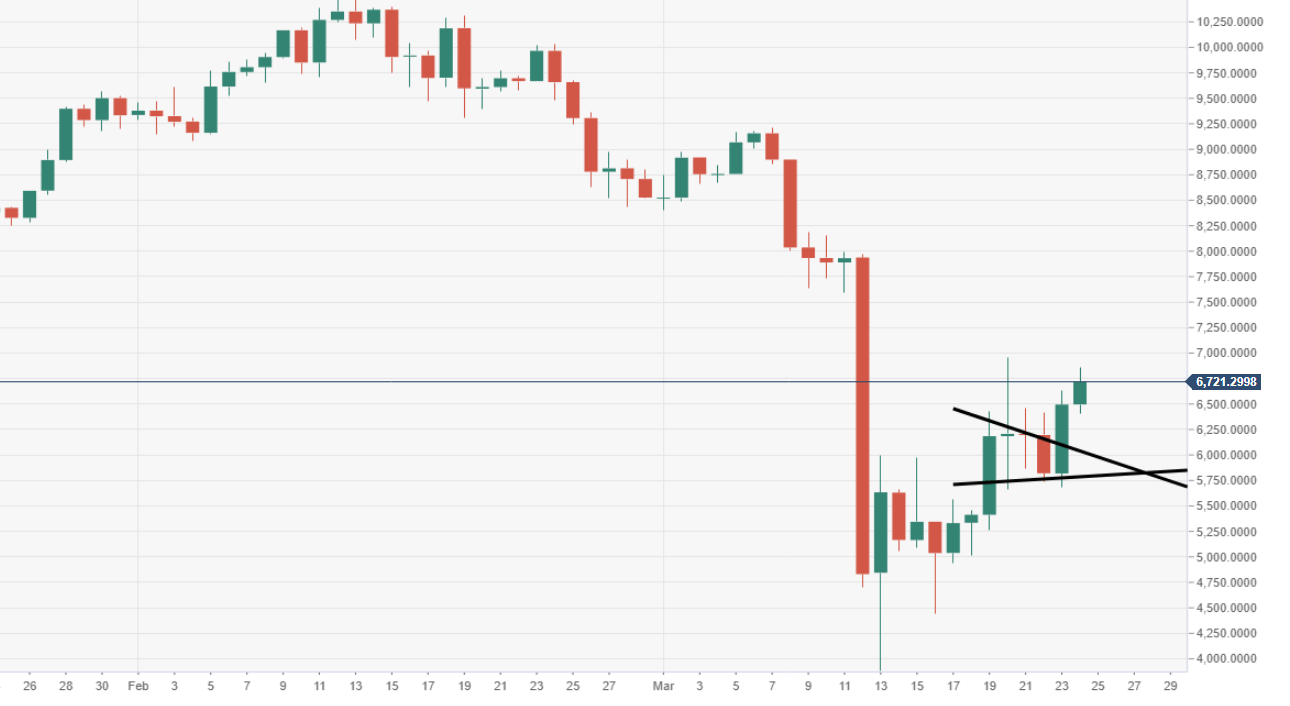 And with governments escalating unprecedented measures to limit...  virus Including travel bans and the complete closure of some regions, markets around the world recorded the largest free fall since the 2008 recession, and the US stock market lost 11.5 trillion dollars, erasing market gains in nearly four years, and even the most important safe haven gold fell to its lowest Its level in 3 months after a massive decrease of 10% in the same period.

But the past few days have been relatively positive for Bitcoin, as it rose more than $1,000 past the $6,000 level, and despite that, it still faces an uncertain and unpredictable future, given the amount of uncertainty that currently exists regarding the expansion of the Corona virus in the countries of the world. .

What to expect for Bitcoin before the halving event?

The currency is scheduled to undergo the halving event in May, and many analysts and experts do not know what will happen next, as it was believed that the halving will lead to a significant rise in the price of the cryptocurrency, in the past, the price of Bitcoin rose whenever the halving occurred, because it reduces The number of bitcoins equivalent to the halving becomes rarer and more valuable.

However, it is unclear whether these results will repeat themselves, especially since Bitcoin is currently in its most vulnerable spot. Recently, Bitcoin has fallen from over $10,000 to over $6,000, although its current price is something of an improvement from what it was. As it did last week, Bitcoin still has a long way to go before fully regaining the gains it made at the beginning of this year.

Contents hide
1 Bitcoin is falling as governments escalate
2 What to expect for Bitcoin before the halving event?
Forex Brokers Offers
Your capital is at risk
The complete list of forex brokers
Trading with a regulated broker
Your capital is at risk
© All rights reserved 2022-2'13. ForexBrokers.ae - English Forex Brokers
Disclaimer: This page is for educational and informational purposes only. No trades are provided through the ones on this page. Despite this, ForexBrokers.ae takes great care in verifying the information it has on the site. However, the accuracy of this information cannot be guaranteed. Therefore, we recommend that you get advice from an independent financial expert. Trading in forex and binary options always carries some risk and is not recommended to all investors and traders. Before deciding to trade in foreign exchange, you must determine your investment goals, experience and your willingness to risk. You should know that there is a chance of losing all your first investment, so you should not invest in your money that you need. Read the complete citation