After a week of losses, the Bitcoin currency managed to rise again and rise higher, surpassing the psychological support level of $ 10,000 strongly, with the return of demand for buying Bitcoin, with the markets optimistic about some positive news as the date for the launch of the Bitcoin-denominated futures contract was set by the largest futures exchange. In the US Bakkt.

During the last week's trading, bitcoin lost XM Arabia 15% to post its first weekly decline in three weeks, due to weak demand for the world's largest cryptocurrency with renewed concerns about regulatory operations in the United States, as the US Securities and Exchange Commission postponed the decision on the inclusion of bitcoin in exchange-traded funds Provided by VanEck, Bitwise and Phoenix.

Positive developments in the US-China trade war were also a means of pressure on Bitcoin, as US President Donald Trump announced last week to postpone the implementation of new tariffs until December 15, which was supposed to be implemented on September 1. . 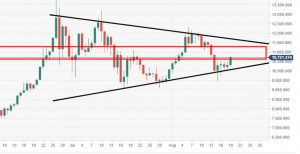 The current rise in bitcoin is giving the green light to Bakkt, an affiliate of the Intercontinental Exchange, from the US Commodity Futures Trading Commission to launch bitcoin-denominated contracts next month.

Bitcoin's performance over the past few years

What is expected for bitcoin in the near term?

The decline in the price of Bitcoin in the past week and its growth again indicates that the collapse of the commodity and stock markets is stimulating the demand for buying cryptocurrencies, especially when this happens due to the deterioration of the political situation as in Hong Kong or the sharp weakness of national currencies everywhere in Eastern Europe .

The global turmoil is expected to increase the demand for buying bitcoin along with traditional safe assets such as gold.

Contents hide
1 Bitcoin's performance over the past few years
2 What is expected for bitcoin in the near term?
Forex Brokers Offers
Your capital is at risk
The complete list of forex brokers
Trading with a regulated broker
Your capital is at risk
© All rights reserved 2022-2'13. ForexBrokers.ae - English Forex Brokers
Disclaimer: This page is for educational and informational purposes only. No trades are provided through the ones on this page. Despite this, ForexBrokers.ae takes great care in verifying the information it has on the site. However, the accuracy of this information cannot be guaranteed. Therefore, we recommend that you get advice from an independent financial expert. Trading in forex and binary options always carries some risk and is not recommended to all investors and traders. Before deciding to trade in foreign exchange, you must determine your investment goals, experience and your willingness to risk. You should know that there is a chance of losing all your first investment, so you should not invest in your money that you need. Read the complete citation