Cryptocurrencies are recovering quickly after a sharp recovery from monthly lows

The cryptocurrency market has been given a breather since Wednesday morning, as prices recovered from Tuesday's lows.

The cryptocurrency market has been given a breather since Wednesday morning, as the prices of the leading crypto-asset recovered from Tuesday's lows.

Bitcoin price surged to $34,000 on Thursday after diving to $29,000 on Tuesday, hitting its lowest level this year, and Ethereum also surpassed $2,000 after selling pressure pushed it to nearly $1,700 on Tuesday.

This recovery comes after a week in which all digital assets recorded strong declines, following the decision of the Chinese authorities to intensify their crackdown on mining and cryptocurrency trading in the country. 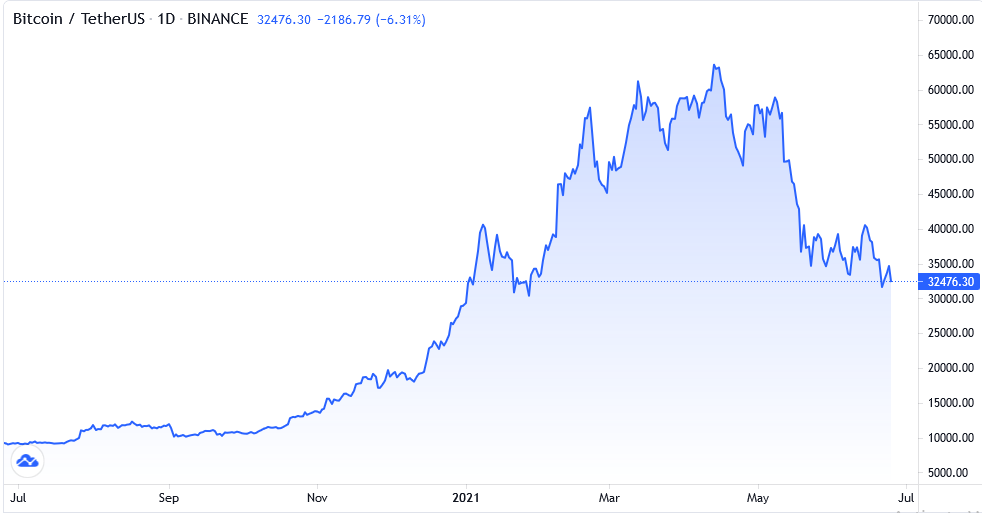 Low liquidity in the cryptocurrency market

The recent development in the cryptocurrency market has also reduced activity on most blockchains, reflecting lower levels of trading.

Blockchain data reflects that on-chain activity across the board is notably low, particularly Bitcoin and Ethereum, with demand for the block space dropping to levels last seen in 2020.

Active Bitcoin addresses are down 24 % from a peak of 1.16 million seen from March to early May, current activity is 884,000 addresses last seen at this time last year.

Lower prices due to strict regulation of mining in China

Bitcoin prices have been under constant pressure from the Chinese authorities to get rid of crypto-related activities, while the ongoing attack by miners and trade links is one of many attempts, but this current ban is feared because the proposed digital yuan is in advanced stages, the ban may be a strategic To prevent competition with the government-backed currency.

As China continues to enforce the ban, MicroStrategy CEO Michael Saylor continues to reaffirm his confidence in the potential of Bitcoin to crypto-industry players and institutional investors. The company's holdings of bitcoin to 105085 digital currencies.

Although the accumulation of MicroStrategy may not move the market, it can inspire other corporate buyers to bet heavily on the currency, a situation that may collectively affect the price of the asset.

Contents hide
1 Low liquidity in the cryptocurrency market
2 Lower prices due to strict regulation of mining in China
Forex Brokers Offers
Your capital is at risk
The complete list of forex brokers
Trading with a regulated broker
Your capital is at risk
© All rights reserved 2022-2'13. ForexBrokers.ae - English Forex Brokers
Disclaimer: This page is for educational and informational purposes only. No trades are provided through the ones on this page. Despite this, ForexBrokers.ae takes great care in verifying the information it has on the site. However, the accuracy of this information cannot be guaranteed. Therefore, we recommend that you get advice from an independent financial expert. Trading in forex and binary options always carries some risk and is not recommended to all investors and traders. Before deciding to trade in foreign exchange, you must determine your investment goals, experience and your willingness to risk. You should know that there is a chance of losing all your first investment, so you should not invest in your money that you need. Read the complete citation