Bitcoin recovers most of its losses after El Salvador announcement

Bitcoin bounced back on Wednesday (June 9) after El Salvador's parliament voted to make the digital currency legal, and the price surged to $34,300 which is 11% more than Tuesday (June 8) low.

Over the course of this week, trading volumes continued Crypto However, the bitcoin price remained close to the middle of the recent divergence level of $36,000, and the uncertainty around bitcoin's development kept individual traders out of the market. 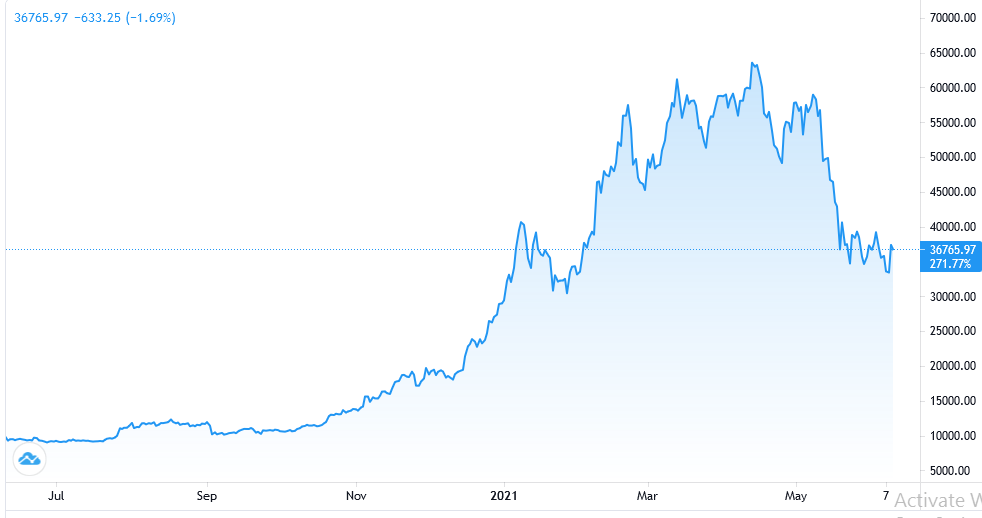 Ethereum also plunged about 10% to below $2,500 after briefly above $2,800 on Monday, with most cryptocurrencies recording a double-digit drop in 24 hours.

The drop comes after about a week of relative silence in the crypto market with most of the leading assets trading in a tight price range.

The biggest catalyst for Wednesday's groundbreaking cryptocurrency price movements was the decision by El Salvador's parliament to pass a bill making the currency legal cash.

The new law means that businesses will now be allowed to display their prices in Bitcoin, and similarly, residents can pay their taxes using the currency. However, the US dollar will remain the dominant currency in the country. It is still too early to tell if other countries will follow El Salvador and adopt the currency.

Factors influencing the market ranged from El Salvador’s recognition of Bitcoin as legal cash, to China’s Weibo which bans a slew of key opinion leaders in the crypto space, Elon Musk has also been busy on his social media channels, but his recent tweets have had no effect. It is mentioned on the market compared to its previous Btgrdth.

Recent comments from US Federal Reserve officials suggest that the world's largest central bank may soon decide to reduce its asset purchases.

Asset purchases from the Fed, currently around $120 billion per month, have been supplying markets with liquidity, driving up stock prices and prompting investors to look for other assets to hedge against rising inflation expectations.

Some investors who put their money into the cryptocurrency market may decide to withdraw now, which may explain the new decline in the price of Bitcoin

Bitcoin price is also rising ahead of US inflation data to be released on Thursday, and the numbers are expected to show continued rise in consumer and producer prices in May.

The stronger numbers expected will increase the likelihood that the Fed will start changing its tone on interest rates and quantitative easing as the labor market continues to tighten.

Rising interest rates and caution are often seen as bearish for Bitcoin and other riskier assets, the logic being that if the leading digital currency rose when the Fed was going down, then the opposite would happen when the tightening started.

Contents hide
1 El Salvador Adopts Bitcoin
2 US inflation data
Forex Brokers Offers
Your capital is at risk
The complete list of forex brokers
© All rights reserved 2022-2'13. ForexBrokers.ae - English Forex Brokers
Disclaimer: This page is for educational and informational purposes only. No trades are provided through the ones on this page. Despite this, ForexBrokers.ae takes great care in verifying the information it has on the site. However, the accuracy of this information cannot be guaranteed. Therefore, we recommend that you get advice from an independent financial expert. Trading in forex and binary options always carries some risk and is not recommended to all investors and traders. Before deciding to trade in foreign exchange, you must determine your investment goals, experience and your willingness to risk. You should know that there is a chance of losing all your first investment, so you should not invest in your money that you need. Read the complete citation