After Bitcoin tried to break above $35,000, the coin changed direction again, losing more than $2,000 in a matter of hours.

After Bitcoin tried to cross the $35,000 level, the currency changed direction again to lose more than $2,000 within hours, and most other digital currencies were colored red, leaving the crypto market losing about $77 billion in total market capitalization.

Just a few days ago, over the weekend the base cryptocurrency swung at $36,000, but failed and recovered to around $33,000, then rebounded again in the following days to nearly $35,000, but due to more negative information coming from China led down by a few thousand dollars again. 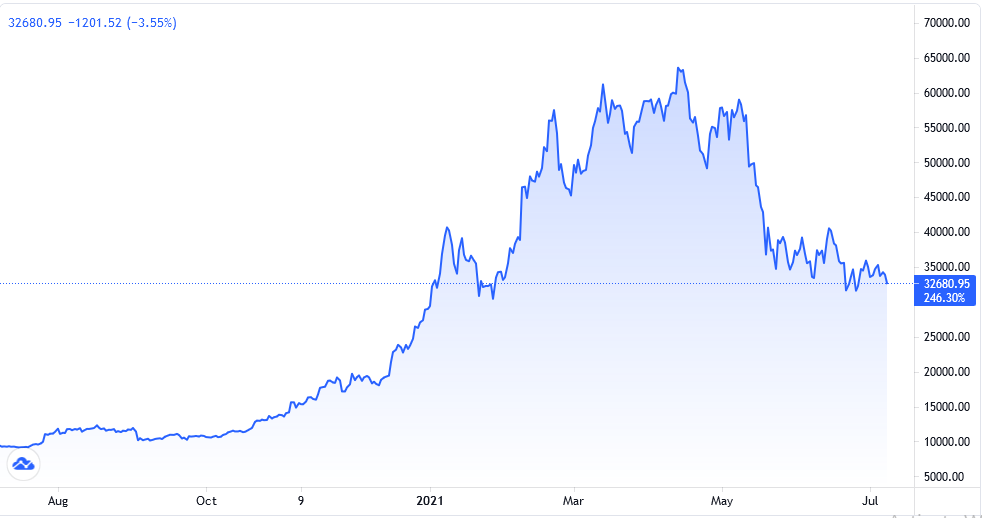 However, Chinese influences appear to have weakened recently, and Bitcoin recovered all losses relatively quickly yesterday, coming close and briefly jumping above $35,000.

But it failed to decisively beat this particular level, within hours the selling intensified, and the coin lost more than $2000, as a result, the asset dropped to a daily low of $32,800 which became the lowest price since the 2nd of July.

Despite bouncing back and recovering $33,000 since then, it's still Bitcoin As low as 4% over 24 hours, its market capitalization is well below $650 billion.

Traders focus on what happens next in the cryptocurrency markets, where prices have started to fall after a long period of stability and consolidation, the initial cryptocurrency price dropped to $32,100 but regained some losses, statistics show that over the course of 24 hours the coin lost 6.4% and about 2.87% Over the past seven days, Ethereum lost 10.5% yesterday and Dogecoin lost 9.9%.

Bitcoin price lost around 49.64% from its high of three months ago, meanwhile, its dominance fell to 44.3% and Ethereum’s dominance rose to a recent high at 18.3%.

Talk about embracing bitcoin and cryptocurrency in general remains a divisive topic among regulators around the world, while China has maintained its stance thus far by banning all crypto-related activities, countries like Iran are now exploring ways to regulate the crypto space after much Trouble to track China ban.

The stalemate in deciding the importance of Bitcoin among US regulators is beginning to fade as stakeholders from key US states including Wyoming, Texas and Miami attract the leading digital currency into their own territories.

These fundamentals affect the long-term cryptocurrency, however, they are not yet determined according to the current price performance.

Contents hide
1 Bitcoin drops below the $33000 level
2 Pay for new regulations
Forex Brokers Offers
Your capital is at risk
The complete list of forex brokers
Trading with a regulated broker
Your capital is at risk
© All rights reserved 2022-2'13. ForexBrokers.ae - English Forex Brokers
Disclaimer: This page is for educational and informational purposes only. No trades are provided through the ones on this page. Despite this, ForexBrokers.ae takes great care in verifying the information it has on the site. However, the accuracy of this information cannot be guaranteed. Therefore, we recommend that you get advice from an independent financial expert. Trading in forex and binary options always carries some risk and is not recommended to all investors and traders. Before deciding to trade in foreign exchange, you must determine your investment goals, experience and your willingness to risk. You should know that there is a chance of losing all your first investment, so you should not invest in your money that you need. Read the complete citation