Bitcoin couldn't get past the $60,000 level and corrected down after rising over the past few days

Bitcoin failed to break above $60,000 level and corrected lower after rallying over the past few days and is currently trading in the over $57,000 range, the leading cryptocurrency should stay above $56,600 to avoid a sharp drop in the near term.

In the past few sessions, bitcoin price has seen a steady increase above the $58,000 resistance and traded above $59,000, but it failed to continue rising to reverse direction and quickly retreated above $57,000.

It is worth noting that Cryptocurrency It has been fluctuating in the $59,000-$55,800 range since March 15 with the only exception being the four-day period between March 23-27.

The total cryptocurrency market cap has lost $27 billion of its value for the period since Monday and now stands at $1.913 billion. 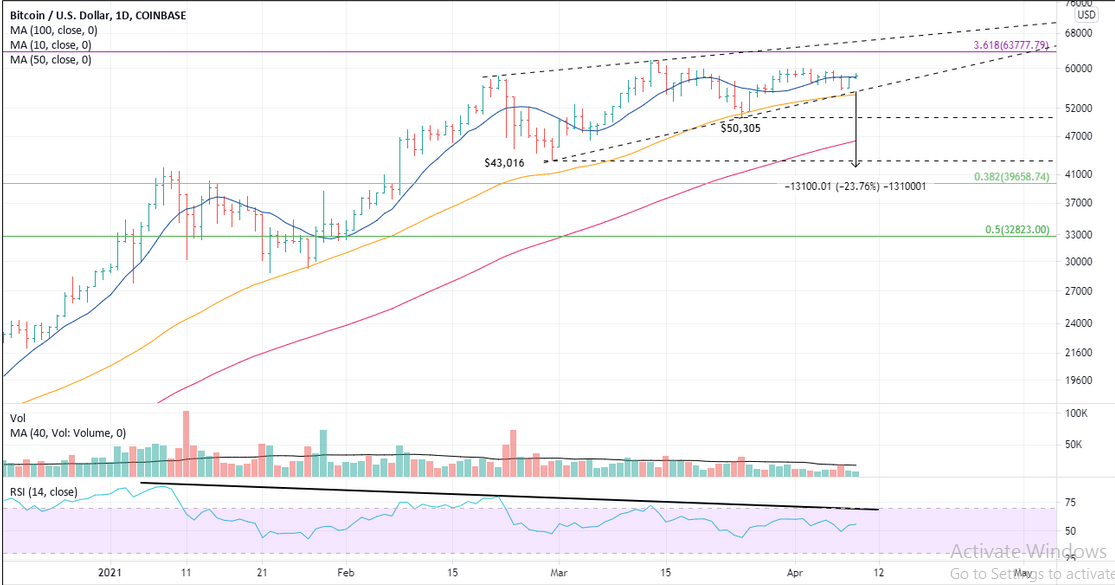 Bitcoin rises by more than 100% in the first quarter

The major cryptocurrency closed the first quarter up more than 100 percent as more and more institutions and companies embraced the idea of the currency’s safe-haven properties, for example: electric car giant Tesla revealed that it invested about $1.5 billion of its cash reserves in bitcoin, noting They consider cryptocurrency to be a store of value.

This was a clear example of how a large corporation is choosing and favoring bitcoin over the dollar, especially under the impression that the dollar will lose value against other fiat currencies after the previous year closed down 6.80%. .

But the strong consensus on dollar weakness began to fade in 2021, as the US dollar index rose 3.6% in the first quarter. Including President Joe Biden's $1.9 trillion stimulus package.

Which resulted in a sharp sell-off in the bond market, which in turn led to higher yields, which increased the attractiveness of government debt among foreign investors, especially in Japan, where the yen fell 7.5% against the dollar in the first quarter. Macroeconomic analysts are convinced that the dollar will fall.

The long-term bearish outlook for the dollar is unchanged, and all of the current bullish factors that drove yields higher that include a faster vaccine launch, recovery in global trade and higher commodity prices will remain dollar bearish.

What about digital currencies?

On the other hand, Bitcoin rose from $20,000 in December 2020 to just over $61,000 in March 2021, which shows that it remains an attractive asset for those anticipating hyperinflation.

One of the main reasons Bitcoin has withstood the strong dollar is the foreign demand itself. Recently, exchanges in South Korea have reported higher trading volumes than global crypto platform Binance, and other parts of the world including Turkey and Nigeria have seen a sharp rise in demand. The leading currency and other crypto assets against weaker local currencies.

Contents hide
1 Bitcoin rises by more than 100% in the first quarter
2 What about digital currencies?
Forex Brokers Offers
Your capital is at risk
The complete list of forex brokers
© All rights reserved 2022-2'13. ForexBrokers.ae - English Forex Brokers
Disclaimer: This page is for educational and informational purposes only. No trades are provided through the ones on this page. Despite this, ForexBrokers.ae takes great care in verifying the information it has on the site. However, the accuracy of this information cannot be guaranteed. Therefore, we recommend that you get advice from an independent financial expert. Trading in forex and binary options always carries some risk and is not recommended to all investors and traders. Before deciding to trade in foreign exchange, you must determine your investment goals, experience and your willingness to risk. You should know that there is a chance of losing all your first investment, so you should not invest in your money that you need. Read the complete citation