Bitcoin returns to the $58,000 resistance level after a brief decline

Bitcoin has struggled to reach the $58,000 resistance level this week, after recovering from a sudden drop in late April.

Bitcoin struggled to reach the $58,000 resistance level as of Monday this week, after recovering from a sudden drop in late April.

Last Monday the price started declining again as it fell to $53,000 per coin, however, the price rebounded again yesterday Wednesday May 5th to witness a sharp rise, and it returned to the $58,000 level, but it failed to continue its bullish momentum to drop on Thursday above the $58,000 level. The $56,000 level.

In just one week Bitcoin price recovery To $58,000, it fell to $53,000 and then recovered to $58,000 again, and this indicates that the currency seems determined to break through the resistance, and there are many positive events driving it higher. 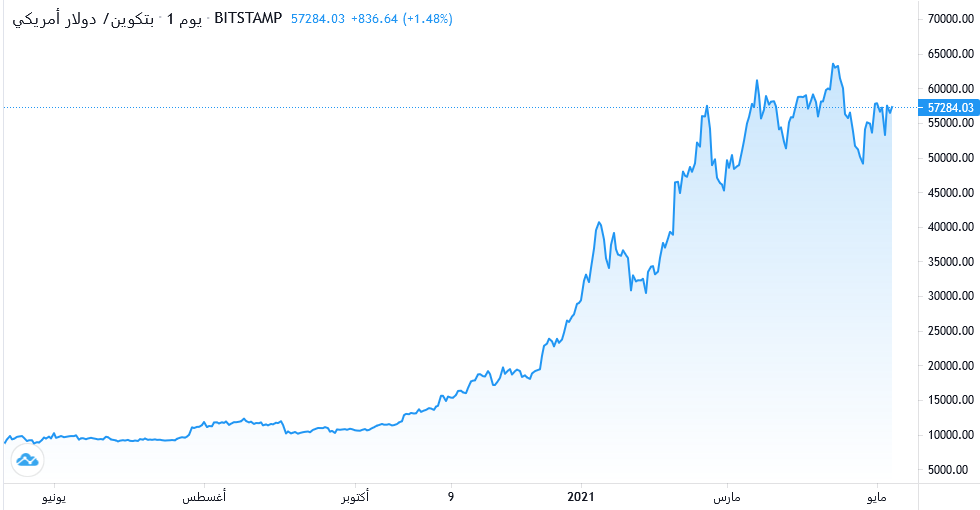 Bitcoin adoption is increasing at a rapid pace

There have been many reports that make the rapid recovery of the bitcoin price and the desire to rise completely understandable, for example, NYDIG, a company working in the field of financial technology, confirmed its belief that the leading digital currency will be accepted by hundreds of American banks before the end of the year, as banks will operate This happens, especially since the banks are starting to notice that all the money will go to Coinbase, and they want to get a portion of the cryptocurrency gains.

Moreover, Bitcoin and Ethereum recently indirectly succeeded in entering Wall Street as global indices, which is definitely a reason for the price hike. Finally, the rising prices of the leading cryptocurrency inspired a lot of Asian companies to accelerate their turn to it.

On Wednesday, the currency recovered to nearly $58,000, and it seems that it is trying desperately to grow and reach the expected rise of $80,000 per coin by the end of this quarter, but it failed and quickly fell on Thursday to about $56,500, although there is still room The currency has some time to reach its target by the end of the second quarter, but so far it is still far from its target.

Moreover, PayPal added about 14.5 million new active users over the past year, bringing the total user base to 392 million, and the company's revenue increased by 31% year-on-year due to the COVID-19 pandemic, which caused an increase in online shopping.

However, Schulman believes that most of the growth came after the introduction of cryptocurrency on its platform, revealing that half of crypto users who use PayPal open their app daily, and to that end, he concluded that crypto encourages engagement with the app.

Contents hide
1 Bitcoin adoption is increasing at a rapid pace
2 Paypal profits exceed expectations
Forex Brokers Offers
Your capital is at risk
The complete list of forex brokers
© All rights reserved 2022-2'13. ForexBrokers.ae - English Forex Brokers
Disclaimer: This page is for educational and informational purposes only. No trades are provided through the ones on this page. Despite this, ForexBrokers.ae takes great care in verifying the information it has on the site. However, the accuracy of this information cannot be guaranteed. Therefore, we recommend that you get advice from an independent financial expert. Trading in forex and binary options always carries some risk and is not recommended to all investors and traders. Before deciding to trade in foreign exchange, you must determine your investment goals, experience and your willingness to risk. You should know that there is a chance of losing all your first investment, so you should not invest in your money that you need. Read the complete citation