With Bitcoin soaring to $39,000 in the last 24 hours and most other cryptocurrencies turning green

With Bitcoin soaring to $39,000 in the past 24 hours and most other cryptocurrencies turning green, the total cryptocurrency market cap has crossed $1.7 trillion for the first time since Friday (May 28).

traded Leading Cryptocurrency In a tight range of around $37,000 for a few days this week, but it finally corrected itself and jumped to a six-day high of around $39,000, most altcoins followed suit, with Ethereum surging above $2800 and Binance surging above $400 . 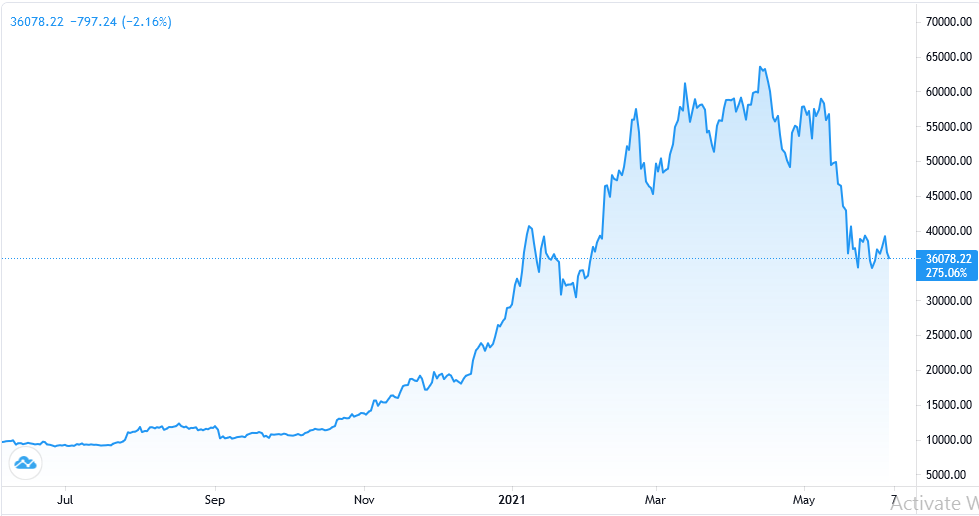 The past few days have been somewhat unexciting for cryptocurrencies, especially bitcoin, which traded between the $36,000 and $37,500 ranges, with these levels plunging at the end of the week to below $33,500.

However, the leading coin finally took a more decisive step yesterday by breaking $37,000, and in the following hours the bulls continued to ramp up their efforts to push the coin to around $39,000, hitting the highest price since May 28th.

Although it has rebounded a few hundred dollars since that rally, the market capitalization of the coin has beaten the required $700 billion level.

So far the date has not repeated itself in the second quarter as May turned out to be the second worst performing month for the coin after dropping by 35%.

Although the second quarter has historically been a very profitable quarter for bitcoin, the asset has failed to make any gains in the same period of 2021 until now, moreover, the coin ended May with heavy losses making it the second worst performing month with a significant drop in percentage 35%.

In fact, May did not go well for the underlying cryptocurrency, which came after the remarkable month of April in which the coin reached an all-time high of $65,000 but eventually rebounded back below $60,000.

May started off fairly well, after bitcoin added a few thousand dollars in the first week or so and challenged the $60,000 target, however, the inability to break it aggressively caused concerns within the crypto community as proponents argued that if If the currency fails to beat it, its price may fall.

Indeed, the currency plummeted soon after, perhaps prompted by Elon Musk and Tesla's rejection of bitcoin payments for the electric vehicle maker's products, and increasing pressure after regulatory pressures from China, when the currency began to decline sharply.

Notably, Q2 is often the best performing quarter for Bitcoin, with gains averaging around 60% before 2021.

Contents hide
1 Total market value rises above 700 billion dollars
2 Second worst month for bitcoin trading
Forex Brokers Offers
Your capital is at risk
The complete list of forex brokers
Trading with a regulated broker
Your capital is at risk
© All rights reserved 2022-2'13. ForexBrokers.ae - English Forex Brokers
Disclaimer: This page is for educational and informational purposes only. No trades are provided through the ones on this page. Despite this, ForexBrokers.ae takes great care in verifying the information it has on the site. However, the accuracy of this information cannot be guaranteed. Therefore, we recommend that you get advice from an independent financial expert. Trading in forex and binary options always carries some risk and is not recommended to all investors and traders. Before deciding to trade in foreign exchange, you must determine your investment goals, experience and your willingness to risk. You should know that there is a chance of losing all your first investment, so you should not invest in your money that you need. Read the complete citation