Bitcoin soared on Monday to an all-time high of $19,864, extending its year-to-date gains to 170% during a volatile 2020 year in global markets. This is due to the growing interest from institutional investors in the digital asset.

After the currency collapsed in March, it began to rally amid the coronavirus pandemic, aided by its scarcity (the supply of bitcoin will be restricted at 21 million coins) in contrast to the monetary easing of the central government, and the initial uncertainty over the outcome of the US presidential election helped bitcoin to rally. It is seen as a hedge against total uncertainty, and Joe Biden's official victory helped even more. 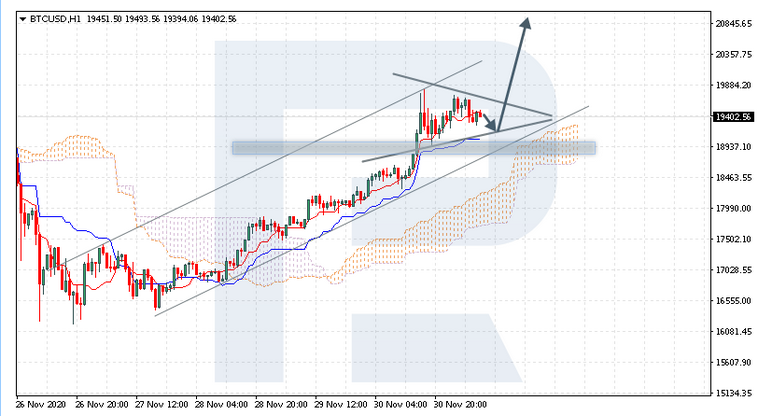 But he was the biggest influencer in Bitcoin Journey For 2020 there are two groups: Wall Street firms moving towards cryptocurrency investing, and two major consumer-facing payments companies, PayPal and Square, which are publicly espousing it.

Hedge fund managers have a long view of the bitcoin price

The Reserve Bank has so far created more than $3 trillion in new money in 2020, more than three-quarters of the total amount created during its previous 107-year history.

For its part, the giant payments network PayPal announced on October 21 that it will allow customers to buy, sell and hold BTC, according to the company. The cryptocurrency will become a source of financing for purchases at 26 million merchants around the world, and PayPal has about 346 million active accounts.

Square has demonstrated its belief in bitcoin since 2018, when it added the ability to buy and hold cryptocurrency in its Cash app. This year the company went even further by buying $50 million worth of bitcoin as an asset to its balance sheet.

Bitcoin last week overcame a major concern: Bitcoin outflows from one of the world's largest cryptocurrency exchanges OKEx, with some traders and analysts speculating that the end of a five-week suspension of withdrawals could translate into liquidations that could put selling pressure on the leading cryptocurrency. .

Data extracted from the cryptocurrency’s core blockchain network showed that about 24,631 bitcoins, worth $500 million at current prices, poured out of the exchange within 24 hours after the suspension was lifted last week.

Contents hide
1 Hedge fund managers have a long view of the bitcoin price
2 Overcoming OKEx
Forex Brokers Offers
Your capital is at risk
The complete list of forex brokers
Trading with a regulated broker
Your capital is at risk
© All rights reserved 2022-2'13. ForexBrokers.ae - English Forex Brokers
Disclaimer: This page is for educational and informational purposes only. No trades are provided through the ones on this page. Despite this, ForexBrokers.ae takes great care in verifying the information it has on the site. However, the accuracy of this information cannot be guaranteed. Therefore, we recommend that you get advice from an independent financial expert. Trading in forex and binary options always carries some risk and is not recommended to all investors and traders. Before deciding to trade in foreign exchange, you must determine your investment goals, experience and your willingness to risk. You should know that there is a chance of losing all your first investment, so you should not invest in your money that you need. Read the complete citation