Bitcoin experienced a massive drop about a week ago, dropping from $55,500 to $47,500, and is now trading in a sideways range

Bitcoin experienced a massive drop about a week ago, falling from $55,500 to $47,500, since then, bitcoin spent several days sideways trading, then made a strong recovery two days ago, however, it remained lower due to strong resistance at $55K.

is back Bitcoin price Over $53,000 in a quick recovery from the key $50,000 level, and although the bounce so far looks good, the technical outlook is that bearish days await the currency. 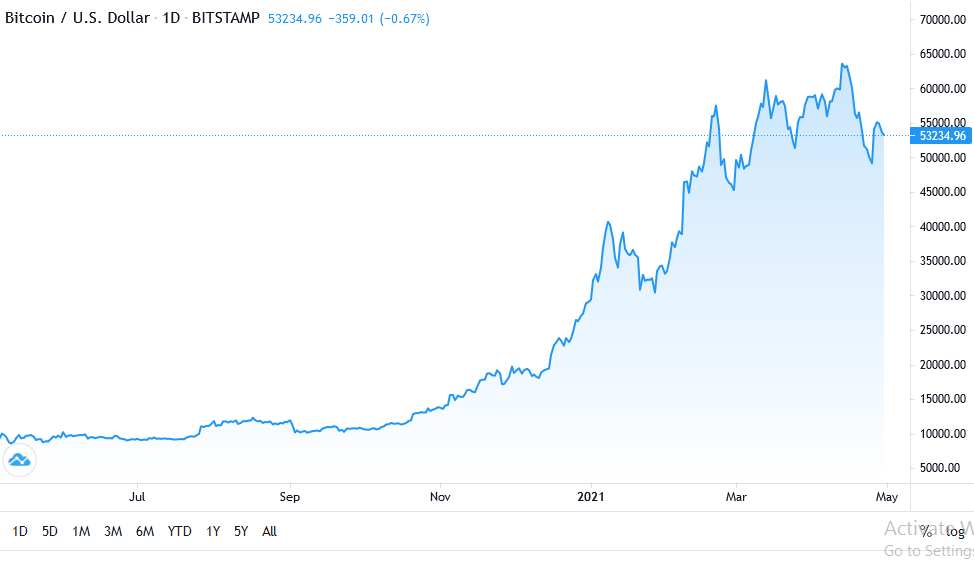 Although things have been quite bullish for some time for Bitcoin, April was the first month that things turned from green to grey. It was given another boost the day Coinbase went public.
Bitcoin price is down more than 27% after hitting an all-time high of $64,899 on April 14.

Bitcoin is recovering after the last drop

It was not the first crash witnessed by Bitcoin in recent weeks, before that, the currency was dropped from an all-time high due to Turkey's decision to ban the use of the digital currency as a means of payment, and the decision is scheduled to enter into force on April 30.
Bitcoin dropped to $47,500 on April 23, then recovered slightly to $50,000, trading sideways near that level until late April 25, when it collapsed to $47,000 and then rebounded to $54,000 at the end of April 26, to be able to than to keep its value from declining further.

However, new US President Joe Biden's expectations to raise the long-term capital gains tax for the richest Americans up to 43.4% led to a sharp drop in the price of Bitcoin.

On the plus side, there are signs of digital currency entering the mainstream, such as Coinbase going public and even options, PayPal launching new crypto features, allowing crypto to be used for shopping.
No one can say for sure where the leading cryptocurrency will go, but it is expected to reach at least $80,000 by the end of the second quarter.

Tesla sells 10% of its cryptocurrency holdings

Tesla released its Q1 2021 earnings report, which showed it sold at least 10% of its position for an estimated profit of $101 million. In February, the company bought $1.5 billion worth of Bitcoin.

Following this news, both the company and its CEO, Elon Musk, received heavy criticism from the crypto community and others, as he was accused of “dumping” his bitcoins on investors “to make a fortune.” of its own, but it was Tesla that sold its 10% holdings mainly to demonstrate bitcoin's liquidity and as an alternative to holding cash on the balance sheet.

Some analysts believe that Tesla may have been trying to hit a specific goal for this first quarter and sold a portion of its bitcoin with this intention. Data provided by the New York Times shows that the car manufacturer has a quarterly profit of $438 million, the company's highest ever.

Contents hide
1 Bitcoin is recovering after the last drop
2 Tesla sells 10% of its cryptocurrency holdings
Forex Brokers Offers
Your capital is at risk
The complete list of forex brokers
Trading with a regulated broker
Your capital is at risk
© All rights reserved 2022-2'13. ForexBrokers.ae - English Forex Brokers
Disclaimer: This page is for educational and informational purposes only. No trades are provided through the ones on this page. Despite this, ForexBrokers.ae takes great care in verifying the information it has on the site. However, the accuracy of this information cannot be guaranteed. Therefore, we recommend that you get advice from an independent financial expert. Trading in forex and binary options always carries some risk and is not recommended to all investors and traders. Before deciding to trade in foreign exchange, you must determine your investment goals, experience and your willingness to risk. You should know that there is a chance of losing all your first investment, so you should not invest in your money that you need. Read the complete citation