Over the past few days, Bitcoin has shown a cascading upward momentum that made it jump higher, breaching the $12,000 resistance, culminating today on some positive news coming from PayPal, the world's largest online payment processor, setting a new record high for the year at $12,800. 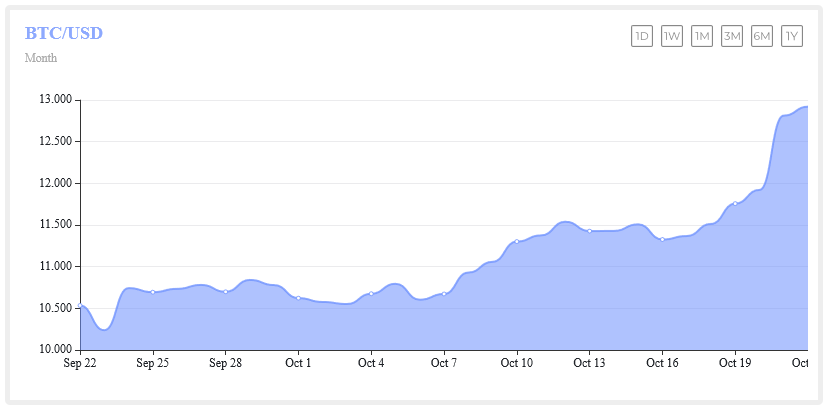 The end of the third quarter wasn't great for me For Bitcoin Traders Pepperstone However, that was to be expected because September was not a profitable month, as throughout the entire month of September the bitcoin price was somewhat stagnant with some minor exceptions, this became a cause for growing fears among cryptocurrency analysts and traders, many of whom were worried that the price would go down.

This all changed on October 6 when the currency started taking an upward curve, since then the price has soared over $2000 with momentum reaching its highest levels today following the major news from PayPal.

The world's largest online payment processor, PayPal, announced that it will enable its customers to buy, sell and store bitcoin and other cryptocurrencies as soon as "the coming weeks" for accounts in the United States and the first half of 2021 for other countries. and financial technology in the world.

Analysts say that this is a major and important step forward towards mass adoption of digital currencies, and the breakneck speed of digitizing economies and every aspect of our lives including financial life, shows that there will be a growing demand for digital and limitless global money which is inherent in the likes of Bitcoin.

Analysts believe that the current trend is the beginning of a new bull cycle for the leading cryptocurrency considering that the coin has quickly recovered from recent negative news including BitMEX fees and OKEx investigations, and the tense economic situation will push the price of Bitcoin to record highs.

At the same time, it is expected that the traditional financial markets will suffer as the number of coronavirus cases rises as the second wave enters much of the world.

Four factors that are believed to drive the markets are the increasing spread of the coronavirus, the second stimulus agreement proposed by the US administration, the policy of the Federal Reserve and the US presidential election.

Unknown developments in the disputed election may lead to a chaotic outcome, which leads to more fears among investors, such conditions may lead to a sharp drop in prices among traditional financial assets, and Bitcoin may emerge as the winner.

Contents hide
1 Poor quarterly performance
2 Paypal supports bitcoin
Forex Brokers Offers
Your capital is at risk
The complete list of forex brokers
Trading with a regulated broker
Your capital is at risk
© All rights reserved 2022-2'13. ForexBrokers.ae - English Forex Brokers
Disclaimer: This page is for educational and informational purposes only. No trades are provided through the ones on this page. Despite this, ForexBrokers.ae takes great care in verifying the information it has on the site. However, the accuracy of this information cannot be guaranteed. Therefore, we recommend that you get advice from an independent financial expert. Trading in forex and binary options always carries some risk and is not recommended to all investors and traders. Before deciding to trade in foreign exchange, you must determine your investment goals, experience and your willingness to risk. You should know that there is a chance of losing all your first investment, so you should not invest in your money that you need. Read the complete citation