Bitcoin tumbled strongly to lose about 12% of its value, bypassing critical support levels, to target the $30K level, amid prospects of further decline.

Bitcoin Hot Strongly to lose about 12% of its value, surpassing critical support levels to target the $30K level amid the prospects of further decline, and this has wiped out nearly $180 billion from the market value since a record high on January 8th.

This pullback coincides with mounting bearish calls from analysts and regulators after a massive multi-month rally fueled by still-buoyant institutional adoption.

Reasons for the huge drop in the price of Bitcoin

The sell-off occurred despite the positive risk sentiment driving traditional markets, prompting analysts to blame a series of fundamentals, from US Treasury Secretary Janet Yellen's comments about Bitcoin being used for illicit purposes, to a Deutsche Bank poll that concluded That digital currency looks like a huge bubble.

When asked about the fate of the end of Bitcoin and the technology stock (Tesla) after the big gains over the past year, the bank mentioned in its report that they are likely to fall to half their current value, and if the Tesla stock will be weaker than that, those fundamentals are upended The pessimistic short-term bullish tendency of the digital currency to the downside. 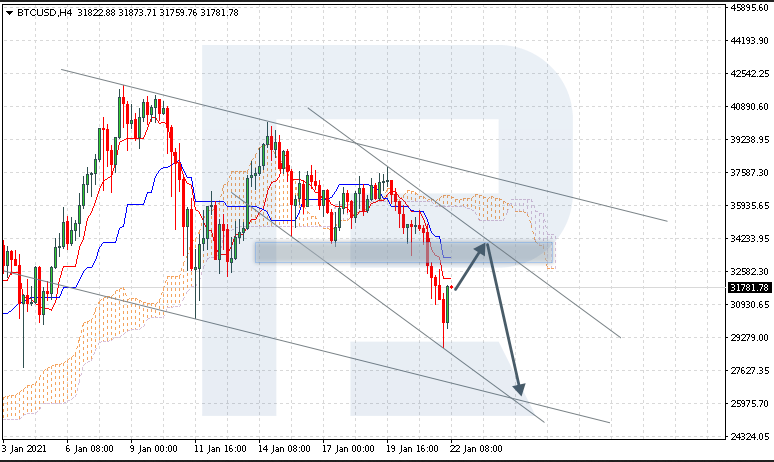 Analysts said the continued losses come as the increasing mainstream Bitcoin adoption drives up correlations with cyclical assets, which could shift cryptocurrencies from insurance to leverage.

Analysts have gone on to say that the leading cryptocurrency is the least reliable hedge during periods of severe market stress, an observation that contrasts starkly with Wall Street experts who say investors are flocking to the world's largest cryptocurrency as a "legitimate hedge against inflation."

The market is still optimistic

However, the market seemed bullish for a pullback from levels around $30K, two weeks ago the price floor had outlived the bears' hold on the bearish correction sentiment after Bitcoin reversed on the rise to a record high near $42,000.

Part of the bullish sentiment dominating the market comes from signs of a growing buildup sentiment. In addition, Grayscale Investments, a New York-based investment firm, has bought 16,244 bitcoins worth over $600 million a day, bringing its net cryptocurrency reserves to more Of the 63,000 coins worth about $23 billion, many analysts agree that their buying spree should offset the cryptocurrency's long-term downside risks.

Meanwhile, analysts are also optimistic about BlackRock's recent filing of papers with the US Securities and Exchange Commission on investing in bitcoin futures. The company, which manages $8.7 trillion in assets, said two of its funds are planning to invest in bitcoin futures.

This indicates that BlackRock understands the value of digital currency, they manage the equivalent of 8% of global GDP compared to Bitcoin which represents about 0.6% of global GDP.

Contents hide
1 Reasons for the huge drop in the price of Bitcoin
2 The market is still optimistic
Forex Brokers Offers
Your capital is at risk
The complete list of forex brokers
Trading with a regulated broker
Your capital is at risk
© All rights reserved 2022-2'13. ForexBrokers.ae - English Forex Brokers
Disclaimer: This page is for educational and informational purposes only. No trades are provided through the ones on this page. Despite this, ForexBrokers.ae takes great care in verifying the information it has on the site. However, the accuracy of this information cannot be guaranteed. Therefore, we recommend that you get advice from an independent financial expert. Trading in forex and binary options always carries some risk and is not recommended to all investors and traders. Before deciding to trade in foreign exchange, you must determine your investment goals, experience and your willingness to risk. You should know that there is a chance of losing all your first investment, so you should not invest in your money that you need. Read the complete citation