Bitcoin falls to its lowest level in more than two weeks, below the $32,000 level

The total market capitalization of bitcoin and cryptocurrencies has lost more than $120 billion over the past two days, after being volatile since the beginning of this week, with bitcoin dropping to a 17-day low below $32,000.

The leading cryptocurrency was not the only one, but other cryptocurrencies also fell and suffered huge losses, as Ethereum traded below $2000 and Binance fell to the $300 level.

The cryptocurrency market appears to be struggling at current levels, as the bulls fail to find enough momentum to move forward, and while most of them are charting moderate gains, the situation has remained largely unchanged in the past 24 hours.

During the first half of July, Bitcoin traded in a narrow range between $36,000 and $32,000, and despite the stabilization period, all indications are that a huge move is coming.

Volume for July has remained painfully low, especially over the past two weekends, which have seen the two lowest volume days. To be in both directions, however, there are more bearish signals than bullish ones. 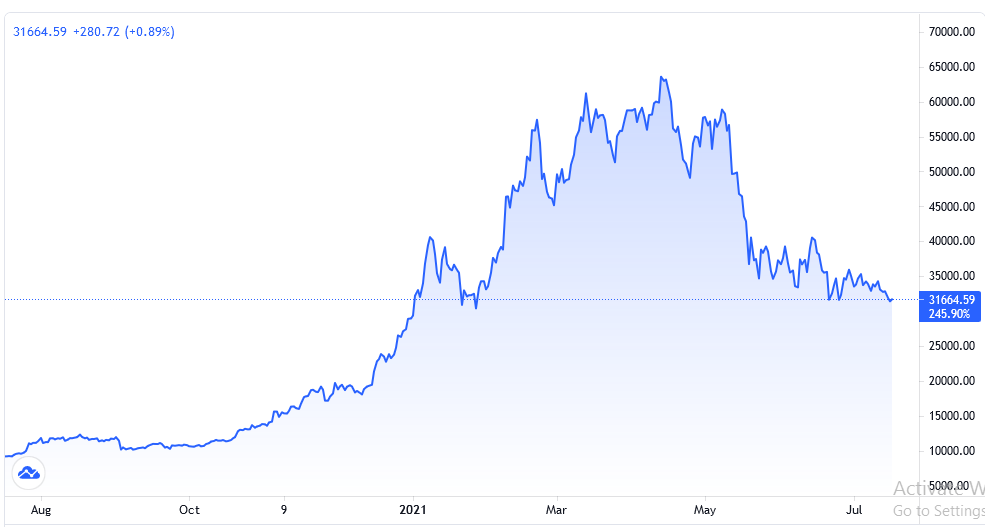 While last weekend recorded minimal trading volume, that did not stop Bitcoin from rising, as it managed to rise from the $33,000 level to the $35,000 level, and although it struggled hard to break that level, it was eventually unable to do so. From completing its bullish momentum to get back to the downside rally and pull back to $33,000.

But it managed to rebound a bit later to settle above the $32,000 level, bringing the total market capitalization of Bitcoin to less than $600 billion, while its dominance of the cryptocurrency market rose to 46%, due to significant losses in other major cryptocurrencies.

The leading cryptocurrency is also declining as investors wait for an upcoming opening of thousands of bitcoins held by GrayScale, the world's largest crypto fund.

One crypto market analyst says that the digital asset ecosystem has been punched in the face, so it is currently in a fierce struggle to survive, usually when you have a big sell-off, investors are very scared and withdraw their money.

Contents hide
1 Bitcoin drops below $32,000
2 Trading volume decreased
Forex Brokers Offers
Your capital is at risk
The complete list of forex brokers
Trading with a regulated broker
Your capital is at risk
© All rights reserved 2022-2'13. ForexBrokers.ae - English Forex Brokers
Disclaimer: This page is for educational and informational purposes only. No trades are provided through the ones on this page. Despite this, ForexBrokers.ae takes great care in verifying the information it has on the site. However, the accuracy of this information cannot be guaranteed. Therefore, we recommend that you get advice from an independent financial expert. Trading in forex and binary options always carries some risk and is not recommended to all investors and traders. Before deciding to trade in foreign exchange, you must determine your investment goals, experience and your willingness to risk. You should know that there is a chance of losing all your first investment, so you should not invest in your money that you need. Read the complete citation