Bitcoin is on the way to recover after the latest drop

Bitcoin has been making major price jumps since the beginning of the year, managing to maintain its bullish momentum since the end of last year.

Bitcoin has been making major price jumps since the beginning of the year, managing to maintain the bullish momentum since the end of last year, which made it break its all-time high before hitting new, unprecedented highs.

On January 9, the benchmark cryptocurrency reached a new record high of $41,900, after which it experienced a downward correction that sent it down to $31,000 to lose more than 25% of its value, but soon the coin has already started to recover to rally again, and it is likely that It is trying to set a new record soon if it continues to maintain its upward momentum. 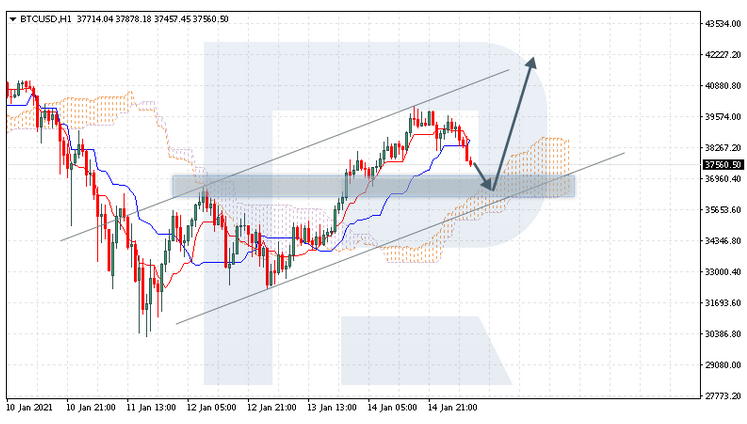 The difficulty of the downward correction of the bitcoin price

The price rally the world's largest cryptocurrency experienced during December is unlike anything we've seen before, even the cryptocurrency's big rally of 2017 was nowhere near the one-year rally it saw last month, however, the higher the rally the harder it was to fall. when a correction occurs.

The correction that the coin has seen in the past few days around 25% is enough evidence that it will be difficult to pull back as Bitcoin continues its bullish momentum.

He went Bitcoin price It came full circle in the past nine days, beginning Jan. 5 at $31,000, then spent the next three days skyrocketing to $41.9K, followed by about two days of sideways trading, with only smaller swings between $40,000 and $41,000.

On January 10, the currency started to collapse and returned to $31,000, and fortunately the support stopped the decline, to witness the later days of Monday and a rebound immediately to trade at the moment above $39,000, amid the prospects of setting another new record.

Great success in a short time

The digital currency has grown faster than ever, breaking its previous peak in 2017 at $20,000 and even doubling it in less than three weeks. The entire crypto industry, as the currency has attracted individual and institutional investors all over the world.

There is no doubt that the leading digital currency was a huge hit, but then its price was rejected, and the coin collapsed by more than 25% causing the news media to quickly overturn, JPMorgan analysts warned that the price drop could have a negative impact on Implementation of a Bitcoin-backed ETF, while Bank of America predicts Bitcoin as the “mother of all bubbles.”

It is still not clear what exactly caused the price to suddenly drop, especially since the demand for bitcoin was at its peak only a few days ago, and institutions are still buying through brokers such as Grayscale and Microstrategy.

One explanation might be the recent movement of cryptocurrencies a decade ago that went untouched since 2010, at the height of the Bitcoin rally, suddenly moving towards it.

Contents hide
1 The difficulty of the downward correction of the bitcoin price
2 Great success in a short time
3 Unclear reasons
Forex Brokers Offers
Your capital is at risk
The complete list of forex brokers
Trading with a regulated broker
Your capital is at risk
© All rights reserved 2022-2'13. ForexBrokers.ae - English Forex Brokers
Disclaimer: This page is for educational and informational purposes only. No trades are provided through the ones on this page. Despite this, ForexBrokers.ae takes great care in verifying the information it has on the site. However, the accuracy of this information cannot be guaranteed. Therefore, we recommend that you get advice from an independent financial expert. Trading in forex and binary options always carries some risk and is not recommended to all investors and traders. Before deciding to trade in foreign exchange, you must determine your investment goals, experience and your willingness to risk. You should know that there is a chance of losing all your first investment, so you should not invest in your money that you need. Read the complete citation